Pioneer Trifecta ( or Triumvite ) consists of three prominent peaks in Idaho's Pioneer Mountain Range : Hyndman Peak, Old Hyndman Peak, and Cobb Peak. Prior to our trip, Ben Stout and I both did our own research. There was not much information on connecting these three peaks. It was difficult to estimate how long this might take us, which is the main reason I wanted to post the route to FKT. All sources also took an alpine approach (gear) and connected Cobb to Old Hyndman, via a steep and chossy ridge line (pictured below). We would were open to the idea, but also had a Plan B which we took and required extra work (although might be still faster). Here is what we did:

Starting from Hyndman trailhead, we ran up all of the trail / road leading to Old Hyndman Peak, until scree fields. When we reached Old Hyndman we scrambled up a face that was directly next to the 'black dike'  many climbers noted online (Class 4?)

After peaking Cobb we navigated our way toward Hyndman trail. This was the largest section of small loose scree=. We eventually found a steep chute that we decided to do switchbacks down. We bottomed out quickly here and reached a nice creek.

Old Hyndman Peak had no scrambling, but was composed of a long upward scree field. We came down glissading snow fields to the east. 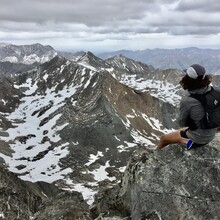 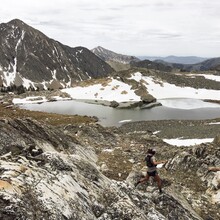 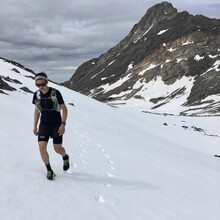 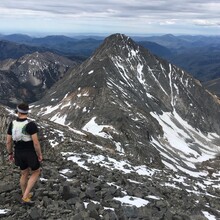 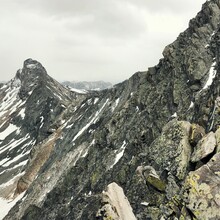 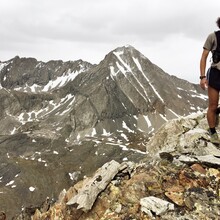 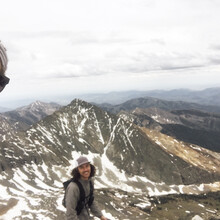 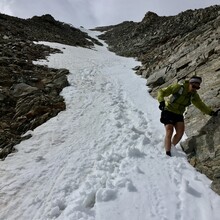 For those that are interested, some pre-history: I've done the "Triple Crown" 3 times, back in the late '90's/early 00's. I'd heard about "the triple" from SV locals Whit and Danny Albright, who linked the peaks with Jeremy Sherer, perhaps the first folks to do so. Rob Landis (at the time a recent winner of the Wasatch 100) and me did a counter-clockwise lap starting w Cobb, then I returned twice solo to suss the route try and knock off some time. Background: Rob and me were both serious xc racers in those years, both competed in NBC "Survival of the Fittest" and BBC's"Conquer the Arctic" and later did a 38 hr. run on the Idaho 12'ers.

We were gunning, but didn't record the times. Rob recalls our team effort being 7ish hours, and my faster solo at "just under 6 hrs". That fits my memory as well. My solo route was a not-fucking-around (clockwise) effort, following the more-solid, but more- technical rock on the West Ridge of Hyndman, then a sneaky snow line left and uphill from what is probably the "standard", wet chimney line on Old Hyndman. We (and I) stuck to the occasionally sketchy ridge between Old H and Cobb.

I've been asked about the route a number of times by kids I was coaching at SVSEF, but always discouraged them doing it due to loose rock hazard on the west side of Old H, and the Old H/Cobb ridge.

Enjoy the mountains, don't get killed!