The Trans-Zion Trek (sometimes also called the "Zion Traverse") is a 48-mile route across Zion National Park in Southwestern Utah. It runs from Lee Pass in the Kolob Canyons section of the park, to the East Entrance Trailhead, though stunning and diverse high desert landscape. The route is typically done as a 5-day backpacking trip.

West-to-east distances are approximately as follows. Much more detail (and maps) is available on Joe Braun's site.

The crossing was apparently first done in a single day in the early 1990s by Terry Tucker. The idea was picked up by Bo Beck, and dubbed the "Far Far Fest". Beck and friends have made the trek several times, and in both directions. Beck's fastest time is 14h25m, set April 28, 2007 (west to east).

The route was "rediscovered" by Jared Campbell while studying maps of the park. Campbell and champion ultrarunner Karl Meltzer ran the crossing from west to east in 10h24m on April 19, 2008. The two were resupplied by friends at the West Rim TH (near Lava Point), and at the Grotto in Zion Canyon.

On May 2, 2009, a large group mostly from Boulder, CO, tackled the Trans-Zion. 14 runners started at the Lee Pass TH, and 3 at the East Entrance. The west-to-east runners had support at the Hop Valley TH and at the Grotto, but the east-to-west runners were unsupported. Conditions were excellent, with generally cool and overcast weather but little rain, and many water sources running. The Telephone Canyon Trail was closed, so all runners used the West Rim Trail (as did Campbell & Meltzer). All-star backpacker turned champion ultrarunner Andy Skurka ran east-to-west (unsupported) in a new record time of 9h27m. Ever the trip planner, Skurka has detailed information about the route on his website, including a map set and databook. He also posted a nice YouTube video & spectacular photos from the trip on his site. Other finishers of the Trans-Zion that day were Jason Chapman, Greg Poettgen, Peter Bakwin (10h29m, west-to-east), Carol Gerber (13h00m, west-to-east, women's FKT), John Prater, Mark Oveson, Eric Lee, Paul Grimm, Stephanie Ehret, Kari Fraser, and Chris Gerber (the last 5 also did side trips to Kolob Arch and Angel's Landing). Dan Brillon, Jonas Fast, Kristen Alvarez, Louisa Jenkins and Tressa Breindel started at Lee Pass and stopped at the Grotto.

Jared Campbell took back the FKT, with his friend Christian Johnson, on November 27, 2009, running west-to-east in 9h08m. They had about 1.8 "bonus" miles to get aid from Campbell's fiance at Wildcat TH, since her car couldn't get to the West Rim TH.

Campbell & Johnson's FKT held for less than half a year, as Matt Hart became the first to go under 8 hours, running east-to-west in 7h58m on May 14, 2010. About 2 years later, Luke Nelson took 10 minutes off Hart's time, running 7h48m47s on May 3, 2012, as reported below. Nelson ran east-to-west, which seems to be the preferred direction for going fast. His run was supported. Nelson's FKT lasted only 11 months, when Travis Macy ran 7h27m46s west-to-east, supported, as reported below. As the overall FKT, this time lasted less than 2 months, and was broken by Mike Foote and Justin Yates in 7h22m8s east-to-west, supported, as reported below. Hayden Hawks, of nearby St George, UT, finally cracked the 7-hour mark, running east-to-west in 6h50m49s on April 14, 2017. Macy's time remains the west-to-east FKT.

Carol Gerber set the first known FKT by a woman (13h00m, west-to-east) on May 2, 2009. Her report from the run is below. Candice Burt set a new women's FKT at 11h47m (west-to-east, unsupported) on November 16, 2011. Her report is on her blog. Krissy Moehl demolished the previous women's FKT on May 3, 2012, running the route in 9h09m (east-to-west). Moehl started with Luke Nelson, but they only ran together a short time before Nelson pulled away. Like Nelson, Moehl's run was supported. Bethany Lewis reported (below) that she lowered the women's FKT to 8h32m on April 21, 2013. Her run was self-supported and partially paced. Montrail athlete Joelle Vaught took another 6 minutes off the women's FKT on May 20, 2016, as reported below (east to west, supported, partially paced). Montrail produced a nice video of Voight's adventure. In just a few years this has become a highly competative and sought-after FKT!

Craig Lloyd did the first known double Trans-Zion in 26h55m03s on May 11-12, 2012. His full report with photos is at www.refuse2quit.com/2012/05/zion-double-traverse-report.html. Lloyd's trip was supported. Lloyd returned with Jennilyn Eaton on November 7, 2014, and completed the double Traverse in 24h50m (supported).

On August 25, 2019, a large rockfall closed the East Rim Trail, as well as the very popular Observation Point, Weeping Rock, and Hidden Canyon Trails.  This means the full Trans-Zion cannot be done, as there is no bypass of any kind.  One can do the 37 miles from Lee Pass the Valley.  Very unfortunately and surprisingly, the NPS has no plans to re-open the trail!  The following was received from Zion NP on 11/9/2021:

Currently, there is no final plan for rebuilding that area. We would guess that the area will continue to be closed for many years. Any changes will be announced on our park website: News Releases - Zion National Park (U.S. National Park Service) (nps.gov)

Belt Buckle Route
Rickey Gates and partner Elizabeth Thorp have created a series of custom belt buckles commemorating some of the most iconic and hotly contested FKT routes! Each buckle is awarded to the FKT holder, and passed on when that FKT is superseded. 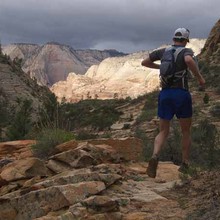 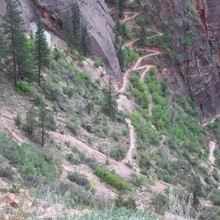 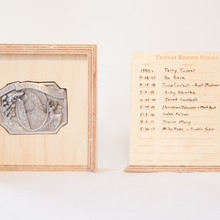 My understanding is that this route is currently impassable because of a landslide that happened a while ago. I would love to do this one day. If anyone finds out the route is re-opened and/or there is a good path around the missing trail that would be an acceptable route alteration (and you don't mind sharing that info), please post it here! Thanks!

You can do the abbreviated route:  https://fastestknowntime.com/route/zion-crossing-ut