This is one of the most popular running and mountain biking routes in Ohiopyle State Park. It begins at the Sugarloaf Mountain Bike Area/ Sled Hill. From there, cross Sugarloaf Road to Canyon Edge. Make a right at the first "T" in the trail, and then bear right shortly after that. This is Upper Canyon Edge, which is a nice, flowy, rocky trail. After a mile or so, take a right to get onto McCune, which begins as a gradual, non-technical grass-lined hill. You'll run through McCune Trail parking lot. Look for the trail on the left, which is an uphill nearly hair-pin turn that begins while still on the McCune parking lot driveway. Climb the hill (the steepest of the run) to the top and stay left to continue on McCune. Once at the top of the McCune, you are now on the most technical, rocky, rooty portion of this run. You'll come to a "Y" in the trail at around three miles - stay right. McCune eventually begins to descend to a scenic overlook/ bench. Go left from there to climb out of McCune on a narrow dirt path that turns into a fast double track trail that is often wet in a couple spots. At almost five miles, which you hit on the double track portion of McCune, bear right to drop back onto the single track connector to Upper Canyon Edge. Follow Upper Canyon Edge the same way you began all the way back to the start/ finish. Watch out for rattlesnakes!

Note about distance: When I mountain bike this route, I get about 6.2-6.3 miles, and when I run it at an easy pace, I get about the same. On the day I ran it as an FKT, my Garmin clocked a shorter distance than I typically get (5.98), so I submitted the mountain bike ride GPX file from the ride a did immediately prior to the run to show the differences in distances, and even a slight difference in elevation, as well as the trail run GPX file. 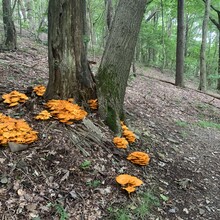 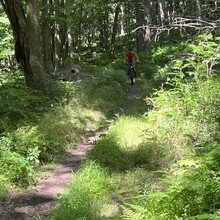