The White Rim Road is a beautiful, 100-mile jeep road (with 7 miles of pavement) in the Islands in the Sky district of Canyonlands National Park, near Moab, Utah. The "White Rim in a Day" (WRAID) has been a classic for mtn bikers since it was first done (probably) by Buzz Burrell in the mid-1980s.

Kelly Agnew claimed the  FKT of 17h47m25s on March 8, 2014. However, in a shocking development Agnew was caught cheating in a 24 hour race at Across the Years.  This article details the incident, and casts very serious doubts on Agnew's FKT claims as well.  The author states "On his blog Kelly claimed to have set 3 FKTs. As I am writing this article, he has deleted all of those posts (as well as reports for all his races that seem suspicious). As I am writing this it seems as though Kelly is busy deleting blog posts."  We are therefore retracting Agnew's White Rim FKT.

Jennilyn Eaton set the women's FKT of 21h52m33s, Nov. 9, 2013. Her report is here. Eaton was paced the entire distance by Craig Lloyd, who posted a report here. She started at Mineral Bottom and ran clockwise.

In 2006, mountain biking legend John Stamstad ran the White Rim completely unsupported (and completely under the radar), as reported here: “I recently ran the White Rim Trail in Canyonlands National Park – 100 miles of desert – and did it self supported. I used a modified baby jogger and had to carry 50 pounds of water, plus food and gear. It took a total of 27 hours. I believe this is the first time anyone has run it without a support crew or aid."  Kelly Agnew claimed to have repeated the unsupported run in 21h52m12s on October 18, 2014, but given his proven record of cheating (see above) we discount this claim as well.

Here's what Corfield said about the WR after his December 2013 run:
"I ... start at the bottom of the Shafer Trail, to get the biggest climb out of the way early. At the top of Shafer, head north on the park entrance road until the turn off to Dead Horse Point, go straight ahead and watch the mile markers on the east side of the road. A little after the 10 mile post, is a left turn which is the dirt road to Mineral Bottom. Nowadays it is well maintained by the gas-well contractors. At runner's mile 26 you will descend to the Green River turn left at the junction near the bottom. This puts you on the White Rim trail which will take you all the way round and back to the bottom of the Shafter Trail. This route is bang on the nail 100 miles around (plus/minus GPS error). The running is straight forward, but there are a few points to bear in mind for a crew vehicle. In winter the Park Service closes the gates at the top and bottom of the Shafter Trail. When they are open you can drive up and down Shafer. When they are closed you will need to come in on the Potash Road (rugged 4WD vehicle advised), drop off the runners, drive back out the Potash Road, come in on the park entrance road (Rte 313) and intercept the runners at one of the junctions: Mineral Bottom road, or Dead Horse Point road. Once you are on the Mineral Bottom road the runners and vehicle follow the same route whatever time of year. There are a few places which can be difficult for vehicles when there is ice or when it has rained and the bentonite clay turns slick: a narrow ledge over the Green just after mile 30; the steep ramps at Hardscrabble; and the steep ramps at Murphy Hogback. If there is snow/ice, bring chains for all four wheels. Allow extra time in your estimates for winter conditions, since you will have more things to take care of on the way around." 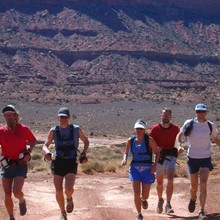 This route on the old FKT site
http://fastestknowntime.proboards.com/thread/12/white-rim-road-ut

Heading out on a White Rim Loop tomorrow 02/18/2020... It'll be unsupported and it's super last minute (I don't even have a planned take off time yet!!). I'm just trying to take advantage of a change in my work schedule. Weather looks good so we'll see how it goes.

If things don't go too downhill by next weekend, (which is highly likely) I am planning to attempt an FKT unsupported (bc social distancing) on the White Rim Road.  I have a spot tracker and can send FKT guys the link to track.  Thanks, all. We shall see. Jennilyn and friends that have done this before me, nice work!

Note major restrictions on visitors to the area:  https://moabcity.org/551/COVID-19-Information-and-Updates