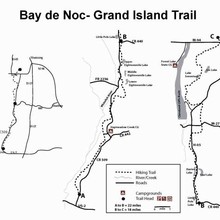 I may attempt the 39+mile point to point from north to south on Friday, December 3rd, 2021, unsupported.  Weather and snow depth at the beginning being the main reasons I might call it off. I have the gpx from this site loaded into Gaia.  Planning to record on Strava and Apple Watch as a backup.  I hope to leave early and have it done by nightfall.  I’ve got someone picking me up at the southern trailhead, so if I’m too far behind schedule with no cell service, I figure I’ll cut to the Rapid River Truck Trail to finish and wait till next fall.

Planning on going full lake to lake, south to north tomorrow (Sunday June 26, 2022).  I will be supported. This is mainly part of my training for a 100 in the fall.  Focus will be on 100mile pacing and nutrition. As such, I don’t expect to beat the current FKT, but here’s me throwing my hat in the ring just in case I feel amazing and conditions are perfect.

Trail Report: Successful lake to lake crossing. Since my main goals were: training, 50+miles, and a lake to lake crossing in under 12hrs (and since I was not in danger of beating the prior record), I took Tower Road (or what becomes Tower Road further north) around mile 36, taking a more direct route and swapping the last 8 or 9 miles of trail on the north end for 6 miles of sandy dirt road.  This resulted in a 50.5 mile run from Rapid River boat launch to AuTrain Beach. All in all, it was about half single track and a quarter each of forest road and pavement.

The 32 miles of the “trail proper” that I ran was surprisingly clear of downed trees despite recent weather.  Very little mud. Relatively flat, which I knew from my winter run.  Lots of ferns, and when they were knocked down from horses on the southern end they kept catching above the tongue of my shoe and tore up my lower shin pretty good (wear long socks).  The trail is mostly sand the entire way. It varies in width and firmness, from narrow & deep singletrack, to loose beach sand, to well-packed forest roads you could drive a large truck on. Prepare for bugs. This was by far the major factor. The mosquitoes helped with pacing, as they can’t keep up under a 13:00 mile. Horseflies were rare, and thankfully the deer flies took turns trying to feast on me, but it was a battle waged for probably half of the run overall. If the breeze stops at the same time that you do, the pack of mosquitos catches up and hits like someone tossed a little handful of sand at you.  Trail was empty the entire way. Horse tracks were the only traffic I noted.

I plan on attempting the point to point tomorrow (December 1st, 2022). Heading South to North. Hope to hack some time off of my prior run roughly 1 year ago. Windy day today so I’m expecting downed trees, but I’m also hoping to see relatively firm and snow-free ground.