Mt. Adams has an "around the mountain" trail (Trail #9), that is partially made up of the Pacific Crest Trail and the Highline Trail.  The east side of Mt Adams is on the Yakima Indian Reservation where there is no trail for several miles across the Mazama Glacier, Klickitat Glacier and Rusk Glacier.


Guidelines:
Any route can be followed to circumnavigate Mt. Adams as long as the runner/hiker does not go above 8,500 ft in elevation.  The high point is typically Sunrise Camp, on the east side of Mt Adams at about 8,400 ft.  If the trail is utilized (where there is one), the distance around Mt. Adams can be upwards of 40 miles.  The runner/hiker can also elect to go high above the trail (as long as it is below 8,500 ft) on certain sections that cuts off mileage, but significantly slows the pace as there are countless moraines and glaciers to cross.

Typically, the challenge is started from Cold Springs (elevation 5,300) on the south side of Mt. Adams, but could be started from anywhere, as long as it is from a place that can be driven to with a vehicle.

The "Reverse Lollipop" was first done by Matt Palilla & Seth Wolpin, and consists of climbing up & down the mountain, and then running around it. 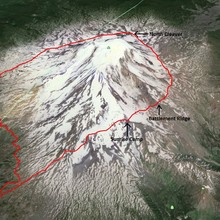 I followed essentially the same route that Lucas King and Tim Dearden took on their previous FKT, going counterclockwise and staying well above the trail on the east side and dropping down to meet the trail on the north side at Devils Garden.

I will attempt to break the Reverse Lollipop or Sum+Circ Record tomorrow.

The higher route was followed for the majority of the trip.  Starting at cold springs where a sharp climb up to Sunrise Camp on the east side of the mountain staying well above tree line ensued.  The route fluctuated between 7000' and 8000' for the majority of the way crossing nine glaciers and countless moraines.  The Around the Mountain Trail #9 was intersected just east of Horseshoe meadows where the trail was utilized back to Cold Springs.

I was thinking about this while out on the Rainer Infinity Loop,

For the Reverse-Lollipop tab under this FKT,

(due to the style set before me by Matt and Seth, as the current record holder as of 8-17-19, and just as a some guy who loves mtns)

I would love to see the president of utilizing as much of the trail "as-is-available" were to be held to with future efforts on "reverse-lollipop", and if the trail is ever completed, in my lifetime, I would gladly come do it again utilizing "all trail" for the circ.

I mean it is cool that Alex, Tim, and Mason have bettered their time by largely ignoring the presence of a circ trail and staying up high on the mountain, they created that FKT initially, and it fits with the rules they initially established with their initial route description.

anyhow, just a humble 'nudge', simply an opinion from some random guy, to a future attempter

Again, this is not a shot at Tim or Alex, those dudes are awesome. just a hope.