Rules for the route:

- the route goes specifically from Rooster Comb Trailhead to the Garden Trailhead, start your watch at register just across the footbridge from Roostercomb parking lot

- Summit Upper Wolfjaw (20 yard out and back from the trail)

- Follow the Phelps Trail on return, NOT the Hopkins trail

The official route is as done by Wellford (see map/GPX) the route is about 25 miles with 9500 feet of elevation gain and 9000 feet of loss, starting at the Rooster Comb TH and ending at the Garden TH, both in Keene Valley. Backpacker Magazine called this the third hardest day hike in America, and described it thus:

There's no small irony in the fact that New York's tallest peak is merely the last challenge on this classic loop-and far from the toughest. The route scales nine peaks, including six 4,000-footers and the aforementioned 5,344-foot Mt. Marcy. But numerous cols and false summits, plus heinously eroded trail beds, wear you down physically and psychologically. From Keene Valley, the murderer's row of peaks includes Rooster Comb, Hedgehog, Lower Wolf Jaw, Upper Wolf Jaw, Armstrong, Gothics, Saddleback, Haystack, and Marcy, from which you descend the Phelps Trail. Gut-check moments include a half-mile of teetering above a 700-foot drop on a knife-edge between the Wolf Jaws - inevitably followed by a steep climb - and the southeast face of Gothics, a scary-steep, exposed descent over open slab rock. There are long stretches of scrambling and ladder-climbing, and you'll need to carry enough water for the day.

Great Range out to Marcy, skipping Haystack for later. Out and back to Skylight because it is an awesome peak, and then up the back of Haystack and back on the Great Range. You can skip Rooster Comb on the way back. The difference in traversing the Great Range depending on the direction is quite profound. The objective here was to create a challenge in the Adirondacks similar to the Swan Song, and the numbers are very similar. It's a long day out and wild ride. (about 29 miles, see Nephew's Strava for the track.) 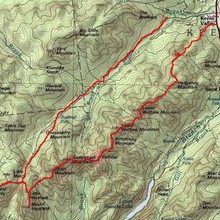