The Bradford Millennium Way is a circular route set up to commemorate the Millennium and travels through the West Yorkshire countryside. It takes you past beautiful scenery like the waterfalls below Hallas Bridge, Leeming Reservoir, Wharfedale and the famous Cow and Calf Rocks. The Millennium Way also demonstrates the history of West Yorkshire based around the Woollen industry from the picturesque stone farms that produced the sheep, the mills at the side of the streams for processing and the Country Houses with Stable yards that the rich industrialists built to take advantage of the shooting on the grouse moors, There are plenty of grouse around on Ilkley Moor and shooting was taking place on the day I passed through. There's also the viaducts and canals built to support the industries in the area. For fans of literature you run up the valley to the Bronte Bridge and through the moors said to have inspired Wuthering Heights.

The route has an annual relay race around it ( https://saltairestriders.org.uk/site/bradford-millennium-way-relay/ ) and was once run in one go, on the same day as the relay, by Hilary Wharam in a time of 14:39:18 at the age of 68 ( https://www.wharfedaleobserver.co.uk/news/8224189.hilary-sets-bradford-millennium-way-record/ ). The route runs in a loop around an area with a number of running clubs including the Bingley Harriers ( http://www.bingleyharriers.co.uk/ ) who I believe have some top fellrunners amongst their members. It would be interesting to see what some of these local runners might manage to get the FKT down to on this route.

The terrain involves mainly well formed trails, some road and some grassy moorland, there are one or two boggy patches but nothing more than ankle deep when I did it. The route has marker arrows the same as public footpaths (small circle with a yellow arrow) with Millenium Way written on it, I also used the guidebook ( https://www.ldwa.org.uk/ldp/members/show_publication.php?publication_id=2385 ) although I did struggle to find my way on three occasions. There is also a guidebook that has twelve circular walks which make up the whole route which would be a good way to recce the route beforehand. A lot of the route is on trails surrounding small villages and through farmland, this means there are lots of gates and stiles which can slow progress somewhat but there are two main sections on the moors above Oxenhope and then from Addingham over to Weecher reservoir. There is normally an outside tap at White Wells but this is currently ou of use due to covid restrictions.

I decided to do the route to see if I could as I hadn't attempted that distance in one go previously and it is an ideal route on which to do so as it passes through many villages where you could stock up or catch public transport if you wish, it is also perfectly manageable unsupported as I did it. i chose this route as it passes within a couple of hundred metres of my front door and as a circular route meant I didn't need to use public transport during the COVID pandemic however in the future it is within easy reach of many towns and a large population of people in West Yorkshire by car or public transport. 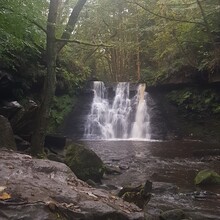 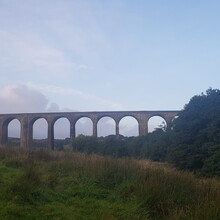 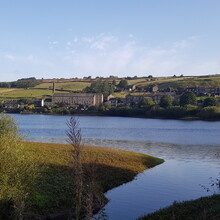 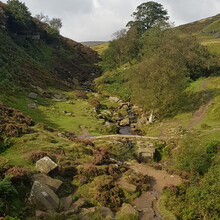 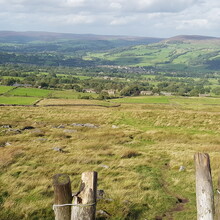 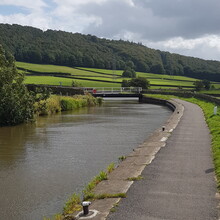 Great work here. This complete loop has been on my list for years and for some reason life has always got in the way and I've never done it. I've participated in the relays twice and always found it strange that no one had really attempted this as a full circuit. In fact, when I checked on here last year it wasn't even listed as a route! It looks like you've set the bar with your unsupported achievement and no doubt others, including myself, will now feel compelled to take on the route. Big respect to you for doing this route and thanks for posting it on here with your description/summary.

Thanks Matt, yes hopefully now it's up others will go for it. Have a good run if you do go for it and let me know if you if I can help at all.