The Skyline-to-the-Sea Trail is a 25-mile route in Big Basin Redwoods State Park, from the Waddell Creek TH to the Saratoga Gap TH.

The Skyline-to-the-Sea Trail is one of the most popular backpacking routes in the Bay Area. The hike is usually done in three days, each with better scenery than the last. The first day's hike starts in Castle Rock State Park at Saratoga Gap and descends alongside busy Highway 9 to Waterman Gap. On the second day, the trail leaves Highway 9 behind and enters Big Basin Redwoods State Park, descending into an outstanding old-growth redwood grove and ending at Jay Camp, near the park headquarters. The final day of hiking is by far the best, descending through wilderness old growth, passing by Berry Creek Falls, and ending at Waddell Beach.For our purposes, we will record non-race FKTs covering the exact route of the Skyline-to-the-Sea Trail, one way and out & back.

The trail is usually said to be about 30 miles long, but my GPS puts it at 25 miles. However, side trips to Berry Creek Falls, the redwood loop, and Jay Camp will add a few more miles.

The Skyline-to-the-Sea Trail can be impassable after winter rains (especially at the stream crossing just after Berry Creek Falls; unfortunately there's no easy detour if the bridge is out) and closed due to summer forest fires. Trail closures aren't posted online or at the trailheads, so the only way to find out about trail conditions is to call or visit the park office (831-338-8860).

As a point-to-point route, the Skyline-to-the-Sea Duathlon (submitted by Will Harmon) makes sense.  Bike from one TH to the other by any route, and run back (or vice versa).  For the biking portion (48-49 miles) Google Maps recommends taking (from Saratoga Gap) CA-35 to CA-84 through San Gregorio, south on Stage Road to Pescadero Creek Road, then Cloverdale Road to Gazos Creek Road then CA-1.

(VARIATION: Suburbs to the Sea)

The Suburbs-to-the-Sea Trail combines the popular Skyline-to-the-Sea 25-mile route through Big Basin Redwoods State Park, and adds another 17 miles of beautiful trails through a quartet of open space preserves (Rancho San Antonio, Monte Bello, Long Ridge, and Saratoga Gap).  At 42 miles, it is a perfect distance for those that are looking for a little extra on the Skyline-to-the-Sea trail, but don't want the monotony of a 50-mile out and back.  This route also boasts a challenging 4,000 feet of vertical gain in its first 13 miles.

The route starts at the Rhus Ridge Trailhead of the Rancho San Antonio Open Space Preserve in Los Altos.  Located just off Interstate 280 (exit El Monte), this trail is easily accessible to Bay Area residents.  Starting in the suburbs and heading to the ocean allows you to progress towards cooler weather as the day wears on.  Public tap water at the Cal Fire Summit Station (mile 15) and Big Basin Headquarters (mile 31) make this a fairly capable unsupported trek. 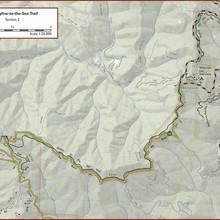 This route on the old FKT site
http://fastestknowntime.proboards.com/thread/1148/skyline-sea-trail-big-basin

Tomorrow (Thursday April 19) I'm planning to attempt to run the Skyline to Sea Trail from the sea to the skyline and back to set the first female FKT.

It will be an unsupported run, using water spigots at Big Basin and Waterman Camp (but no purchases at the store - I don't expect it to be open anyway).
I'm planning to start around 5 am. Looking forward to running in the redwoods!

Thanks Peter! 15:01:11, nice long day amid the redwoods in cool weather. I'll agree with previous runners that the return is more challenging than expected, especially the last few miles with more hills than were there earlier in the day.
I had to make a slight detour in Big Basin park because 0.4 mi of the Skyline to the Sea trail is closed. I took the Sunset Trail to Middle Ridge Road back to the S2S trail (added 0.2 miles and possible a bit more climb/descent).
Happy to finish before dark (just barely), an hour ahead of my predicted time but not quite fast enough to break 15. An excellent FKT route, thank you Adam for setting it up!

Nice run Marcy! And thanks for christening the Skyline to the Sea route on the new FKT site! That detour is definitely more climbing and generally tougher terrain. Well done.