Te Araroa is a 3000 km long route that runs the length of both islands of New Zealand. This is a new route that was opened on December 3, 2011. The route to requires some kayaking to complete, including a 120km descent of the Whanganui River, and there are "hazard zones", including some dangerous rivers and the Cook Straight, where trampers are advised to fine another way around (such as by hitch hiking, or taking a ferry across the Straight).

The trail changes regularly so if people want the most recent and accurate route they are best to get it from the Te Araroa website.  The latest GPS and maps for Te Araroa are here: https://www.teararoa.org.nz/before-you-go/maps-and-notes-download/

The FKT should be for the CURRENT route.

theadrenalist.com reports that Richard Bowles ran the entire Te Araroa, from north to south, from Oct. 13 to Dec. 17, 2012. The complete report from that site is as follows:

"On Monday, Aussie ultramarathoner Richard Bowles stomped a worn-down running shoe in Bluff, New Zealand, completing an epic 1,898 mile one-man race down the length of the islands. 'It’s absolutely stunning; every day is another bit of paradise,' Bowles told Grough in mid November, while he was about half-way through his trek. Bowles set off on the journey on Oct. 13 from Cape Reinga, the northernmost tip of the North Island, pacing himself at just under 29.2 miles per day. On day 65, he hit the end of the line, becoming the first person to ever run the length of Te Araroa, a world-class cross-country trail which opened just last year."

Other links relating to more recent holders of FKTs for Te Araroa: 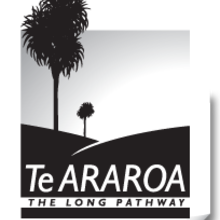 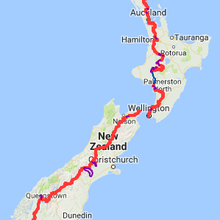 This route on the old FKT site
http://fastestknowntime.proboards.com/thread/387/te-araroa-nz