Combining the two most popular alpine link-ups in Tuolumne Meadows offers some of the best scrambling imaginable anywhere in the world. The first leg begins with a nice trail run from Saddlebag Lake, past the Steelhead Lake, and onto an under-rated Northwest Ridge of North Peak (5.4), crux of which is a short crack from a notch. Taking the NW Ridge substitutes hiking mileage with fun scrambling on good rock, and leads to the most popular alpine climb in TM - the North Ridge of Mount Conness (5.6 - downclimb from the 2nd tower). Though Mountainproject suggests the West Ridge is more popular due to the number of ticks, the summit register shows the North Ridge to be a far more popular route. Perhaps the West Ridge has more ticks on MP because it is more of a roped climb vs the North Ridge, which is mostly scrambled by the majority of parties, after rappelling the 5.6-7 downclimb from the first tower. Run down the East Ridge to the Sawmill Campground. This link-up can be extended by dropping down the west chute and climbing the West Ridge of Conness, after summiting. However, as part of a link-up with 4 other mountains, it feels a little contrived to climb the same peak by a different route. However, it would add another beautiful route to the day and be well worth the extra mileage.

From Sawmill Campground, drive to Tenaya Lake Parking lot and start the Tuolumne Triple! First up is the Northwest Buttress (5.4) of Tenaya Peak, with dozens of possible variations to climbing it. The best crack on the route is a more direct variation to finish, which is rated as 5.8 in the Supertopo guide but feels a little easier. From the summit, run east, and through a notch between Tresidder Peak and Columbia Finger. Continue towards the south end of Matthes Crest, on the way to which you are likely to bushwhack a little. Climb the beautiful start to Matthes Crest and traverse the ridge over its two summits, and continue over the northern end of Matthes Crest, where you will find some exposed downclimbs and the coolest part of the ridge, dubbed the wave. Hike over Echo Col, slide down sandy slopes over to Cathedral Peak and climb probably the most popular moderate route in TM - the SE Buttress (5.6). It too has several variations, all of which are enjoyable in their own way. Get down the west side of the peak and descent down towards the Lower Cathedral Lake, where you will be able to pick up a trail on its north side. Continue jogging down the slabs towards Pywiack Dome and find your way to Tenaya Lake Parking lot, after which a dip in the Tenaya Lake should help with some of the soreness that must be present after gaining about 10,000'. :)

Admin note: Travis Soares suggests a variation that adds White Mountain and Ragged Peak to the other five summits, linking them on foot. He calls it the Tuolomne Wicked Insane Ridge Linkup, or TWIRL. 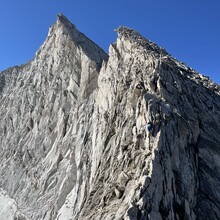 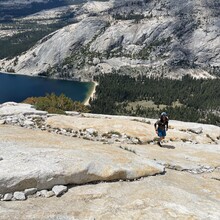 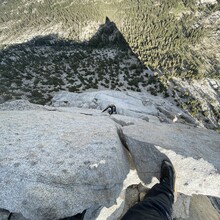 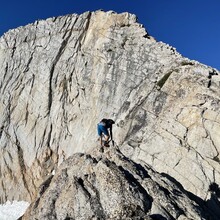 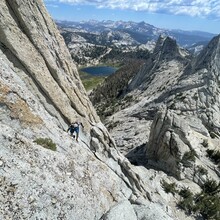 Vitaliy, have you thought of attempting this route car to car via young lakes? Basically all on foot…