The Uinta Highline Trail runs the length of the high Uinta mountain range through the High Uintas Wilderness in northeastern Utah. It is a true wilderness trail, and does not intersect a road for at least 70 miles. The trail is around 100 miles long, but most backpacking trips are done over a 70 mile section between Chepeta Lake and Hayden Pass. A map of this section, which is entirely above 10,000 feet elevation, is here. A topo map is here.

Davy Crockett and Matt Watts set out to run this 70-mile section on August 4, 2007. Their trip was unsupported, which is probably the only practical way to do this route. Davy's detailed report gives an in-depth description of the route. Matt finished the run in 29h44m, with Davy coming in 14 minutes later.

The 200 follows the full 100 mile route from highway 191 to highway 150 and back (McKee Draw to Hayden Pass Trailheads and return, or reverse). "Brutal", "grueling", but saves the looooong car shuttle! 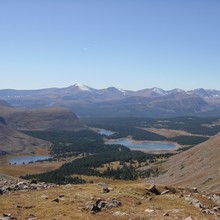 This route on the old FKT site
http://fastestknowntime.proboards.com/thread/39/uinta-highline-trail-ut

I can't figure out from the description if the standard route is 100 miles or 80 miles. Either way, Campbell's a beast.

Anyone know if a 'double Highline' (out-and-back) has ever been accomplished or reported?

Joey Campanelli just did one a couple days ago. Some details on his Instagram.

Thanks!  And wow... that is very impressive.

Starting a Yo-Yo of the UHT today (8/16) from Hayden pass to McKee Draw and back to Hayden Pass, so the full 104 mile route both ways totalling 208 miles. Not sure how fast this will go for me, this is a hike not a run, but wanted to log my intention here and give the link to my Garmin:

If things go well, maybe I will submit for a women's self-supported FKT, either way, totally stoked to be taking on a new adventure!

So that was interesting. Its a DNF due to weather, the Uintas are no joke when the weather rolls in, got a heli ride out with another hiker yesterday. Hope to get back out there at some point. Humbling experience. ~Peace, MP

Just a heads-up:  The Highline Trail is pretty much obliterated by forest fire from the junction with the trail to Brinkley Lake to Ledge Lake (approx. 10 miles and 15 miles east of Hayden Pass TH respectively).   I found it quite impassable at night, and not much better by day.  Excruciatingly slow and painfully schwacky.  Until the trail is cleared, I would suggest maybe researching a detour to Jack and Jill Lakes to the north then back to the Highline. In short, do some research and maybe check out the burned section closer before committing to an FKT on the Highline!