The Fastest Known Time of the Year Awards wrap up with the #2 and #1 winners.

The theme for 2019 continues: Solo and Self-Supported efforts, not done by any previous winners, and on Routes that also haven't been on the Top Five list.  In the three previous years of FKTOY Awards, the John Muir Trail, Rim to Rim to Rim Grand Canyon, and Nolans 14 all garnered four Top 5 Awards each and the Appalachian Trail had three - in 2019, these famous Routes were not even Nominated.

Note that unlike “Ultra Runner of the Year”, the FKTOY is about the effort and the route, not about the person. And remarkably, all 39 Nominations received some Top Five votes - everyone was recognized and was really good!  But which FKTs were most admired? 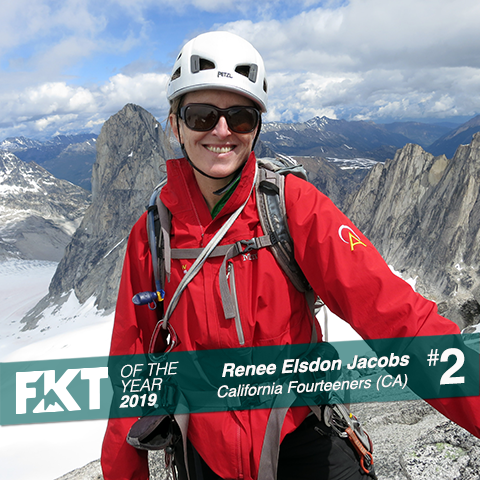 Simply climb all 14 of the summits in California over 14,000’ in height.  This is a big project and Renee is the first Female to do this Solo. The CA 14ers are more technical than the CO 14ers; they require some 5th class climbing.

I consider myself a relatively normal person without any particularly special skills. I simply had an idea and dedicated myself to training to make it happen. I hope that my story inspires you to tackle that dream that’s been stewing in the back of your mind. We are all stronger and more capable than we think or give ourselves credit for. I especially hope to inspire other women to spend time in the mountains and challenge the perception that alpinism is a man’s world. Like Arlene Blum’s expedition to Annapurna 40 years ago, I chose to do my FKT without a man because I feel that a male companion greatly diminishes the female achievement.

“This is a huge linkup, technical and serious.”

“The California Fourteener's require substantial logistics and a fair bit of mountaineering skill.” 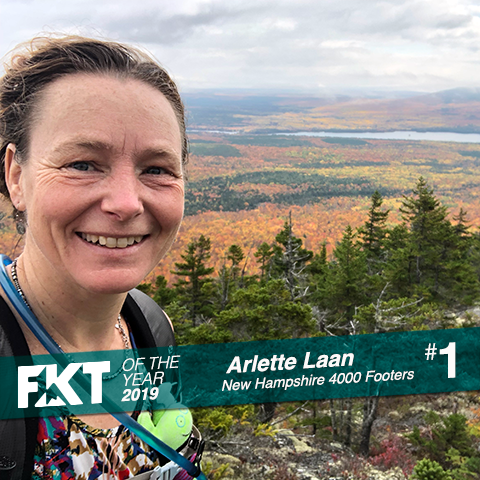 There are 48 summits in New Hampshire over 4,000’ high. Arlette did them all, non-stop, self-powered, Unsupported, Solo.  She carried 9 days of food and supplies from the start.

I just want to go to sleep. But I also want to finish under 9 days. I dig deeper than I ever have and keep going. But then I’ll sit down in the middle of the trail closing my eyes for five minutes. And then I will myself to get back up.  I guess this is what endurance racing is like. I’m pretty sure this will be my first and last taste of that.

After what seems like an eternity I make it to the summit of Cabot. By now my headlamp is almost dead and I’ve been using my phone as my main light source. I have now become one of those people navigating by iPhone flashlight. Oh dear.

I now have a sense of urgency. If I want to get to the trailhead within the 9 days I have to cover about two miles in 1 1/2 hrs and I need to finish before my phone dies. I splash through the muddy Mt Cabot trail and feel all kinds of wrong happening to my feet. Even my fingers are blistering from my gripping my trekking poles. I push the stop button on my tracker. It’s 2.39 am. My total time is 8 days, 23 hrs and 9 minutes.

“To connect all 48 of them, self-powered and unsupported, is a huge sufferfest that I have the utmost respect for.” 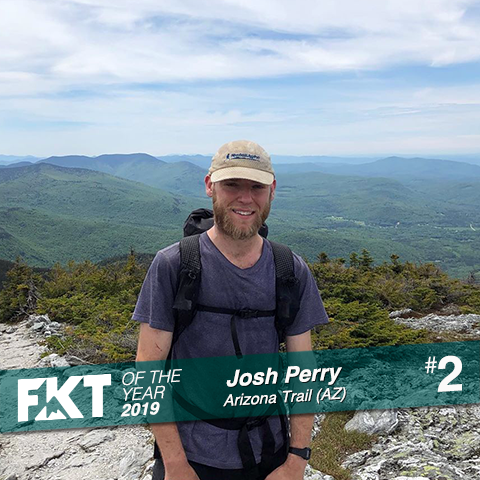 The AZT has the same elegancy as the Long Trail (#4 Male and #3 Female 2019 FKTOY); both simply cross the state N-S, and both have become popular with the FKT community especially this year.  Josh took almost a day off Jeff Garmire's outstanding FKT from earlier in the year; both are faster than the Supported FKT.

All my friends and other hikers were telling me to go after Jeff's AZT time. Then I had 2 failed FKT attempts on the PCT and JMT (due to anaphylactic shock and altitude sickness), and I was starting to think my Long Trail was a bit of a fluke.  Then I found myself on the Hayduke (Trail) which borrows 60 miles from the AZT, with 600 miles of left-over food boxes from the PCT, so I went for it. A few people have played up the idea of competition between us, but as far as I'm aware there isn't any.  We've spoke a bit on IG, and Jeff has been really nice about everything.

“Took down Gamire's FKT on a competitive, big name route”

“Taking a day off Legend’s time is... legendary.” 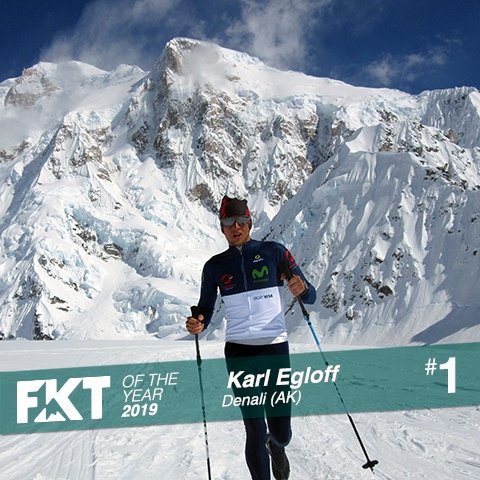 At 20,310’, Denali is by far the highest peak in the US.  The standard route is done from a fly-in Base Camp on the glacier (the nearest road is unreliable and far removed). Karl’s 7h 40m ascent of the West Buttress, with a vert of 13,110’, was 2h 5m faster than Kilian Jornet from 2014 who carried skis. The equipment choice got interesting on the way down as Karl ran through soft snow, coming in a very tight 4 minutes faster than Kilian on the R/T.  This is his 4th FKT on the Seven Summits; he has previously set marks on Kilimanjaro (2014), Aconcagua (2015) and Elbrus (2017).

Listen to Karl on our Podcast:  "I'm not that fast, but I'm at home on glaciers, up high, in the mountains. This is what I was born to do."

"But when I got back down to Camp III, I knew I could do it,” he says. “I started pushing myself. From Camp III on, I was watching the watch more than my own safety. I drank two liters of water on the way up but nothing on the way down. I was just going". - Outside Magazine

“Our sport is a gentleman’s sport,” says Egloff. “He’s (Kilian) the biggest sky runner in the world and I wouldn’t be here if it wasn’t for him. Kilian took this sport to another level and nobody would know who I am if it wasn’t for Kilian. He motivates me.” - Rock & Ice

It is an honor for me to be nominated, thanks so much! Denali has been a wonderful experience, probably the most difficult one and at the same time on of the best places on earth to be and spend time, just a unique place! With 4 of the 7 summits now I could not be happier and at the same time motivated to complete the project. - personal communication

“Besting Kilian's time (again...) Karl is a beast, and it's time that he gets the recognition he deserves.”

“Denali is one of the Seven Summits, so many world class climbers play here.”

Definitely listen to the accompanying Podcast! Every person (except Arlette who has a great excuse and a great stand-in), describe what they did in their own words.

The FKTOY is for North America only, simply because the Voters need to understand the Routes in order to properly evaluate them.  Europe and elsewhere are submitting outstanding FKTs, so the FKTOY - EU will be back in 2020 and maybe separate FKTOYs for Austral/Asia as well.

Our overall goal is to build community - we are instituting new programs in 2020 to enhance our community, so stay tuned for FKT.com 2020 news.

Thank you for your participation!  What fun projects are YOU planning for 2020?!