Gannett Peak (13,804') is the highest peak in Wyoming. Lying deep within the Wind River Range, it is surely one of the most difficult of the 50 state high points due to long approaches and tough climbing.

Gannett is seldom climbed in a single day. An early speed record was by the legendary Chris Reveley, who posted 17h48m round trip via Bonney Pass. We have confirmation of this from Reveley, but so far have not been able to get details, and don't know the date of his trip. He climbed from Elkhart Park via Dinwoody Pass.

Buzz Burrell and Peter Bakwin wanted to climb Gannett in a day, but did not see why everyone was using the long approaches of the usual routes. Studying a map of the, the pair determined that an approach via the Highline Trail from Green River Lakes would be shorter, around 36 miles round trip, and stay within the same overall drainage for greater efficiency. Two drainages allow access to the Gannett's west face from this direction, Tourist Creek and Wells Creek. Wells Creek is the most direct, but the map clearly shows several contours coming together near 10,200' in the drainage, a feature known ominously as "The Cleft". Throwing caution to the wind, Burrell & Bakwin gave Wells Creek a shot on August 8, 2004. They found a wonderful, challenging, beautiful route, with a crux pitch in the Cleft that required some exposed 5.6 rock climbing. After negotiating the Cleft, and enjoying a blue-bird day, they reached the summit in 9h40m, and completed the round trip in 18h15m, not quite matching Reveley's record. Their trip report and photos are here.

The Wells & Tourist Creek routes join above the Cleft, and then ascend Minor Glacier to gain the north ridge of Gannett. Tourist Creek adds more vertical gain as one has to cross over to upper Wells Creek, which is draining Minor Glacier, but there are no technical difficulties, just endless 3rd class boulder-hopping.  Starting at Green River Lakes and going up Tourist Creek immediately became the standard route for anyone concerned with time.

Minor Glacier has been studied by Mauri Pelto of Nichols College, and is in retreat. On a glaciology blog Pelto writes "Minor Glacier on Gannett Peak in the Wind River Range of Wyoming is truly minor compared to when its name was given. The glacier has retreated about 500 m since 1966, which was 35% of its total length. The east side of the glacier is nearly gone. The area has been reduced from 0.87 to 0.26 km2 in the last 50 years." 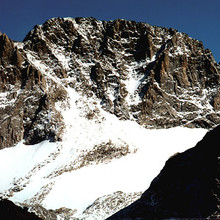 This route on the old FKT site
http://fastestknowntime.proboards.com/thread/48/gannett-peak-13-804-wy

Do you need equipment to traverse glaciers?

When I did this in 2009 (Tourist Creek), and also via Wells Creek in 2004 with Buzz, we used Kahtoola KTS crampons (strapped to running shoes) and ice axes.  I was certainly happy to have them for the glacier.  I know that Anton carried neither and did just fine.  Also, the glacier has been receding rapidly.  Would be worth asking someone who has been there more recently.  But if you don't mind an extra ~2lbs ax and crampons is a good plan.