This "Round" route aims to traverse the 7 named summits and 2 ledge overlooks in the Mount Greylock State Reservation. Mount Greylock is the oldest state protected land in Massachusetts, and the route covers the 4 highest points in Massachusetts (Greylock, Saddle Ball, Fitch, and Williams, though Saddle Ball and Fitch are of questionable prominence). Terrain is quite technical as you'd expect in this area, but runnable, with many beautiful vistas in all directions and some steep climbs/descents. The AT runs over the top of Greylock and the route I took covers several miles of it.

I view the goal of this route to hit all 9 of the following spots: Mount Prospect, Mount Williams, Mount Fitch, Ragged Mountain, Mount Greylock, Saddle Ball Mountain, Jones Nose, Rounds Rock, and Stony Ledge. I chose this points because they're marked on the map, with elevation >2500' and have a trail that goes over (or in the case of Fitch, close by) the summit. The only marked summit I skipped was Sugarloaf, because it didn't seem accessible by trail, and would've required running out of the way on roads to get to.

As far as I'm concerned, future attempts can take whatever route they want to hit these summits. I considered starting at a higher point, but you'll still have to go down into the Hopper to connect Stony Ledge and Prospect, or add a ton of distance. You'll notice I screwed up right away on my attempt and missed the turn for the climb up Prospect (which I think is the hardest climb on the route) and had to backtrack which added about 1.8 miles. I would encourage future attempts to go the correct way and not follow my roundabout route. It certainly cost me some time, all though it was much easier and faster per mile than going up the ridge to Prospect would be. My hope is that people would not run on the paved roads other than to cross them. I chose to come back up Jones Nose to CCC Dynamite from Rounds rock rather than taking a route that probably would've been faster and flatter but would've had to run on Rockwell road for a bit. I also didn't technically summit Fitch, because you apparently have to go 100 yards off trail to do so and that seemed inappropriate. Just followed the AT. 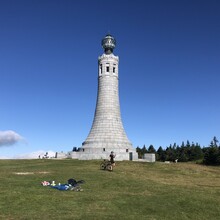 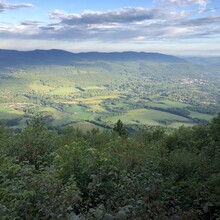 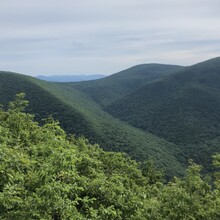 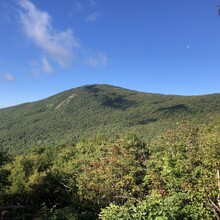 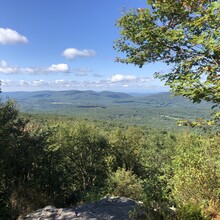 Nice route!  And I'll add that there's no markings at all to let you know when you're close to the summit of Mt. Fitch - I've been on that section of of the AT many times and I couldn't tell you where the "peak" is!  I'm not quite sure what you screwed up with Prospect; it looks like you hit the vista and then did an out-and-back along the ridge to the big cairn (one of my favorite trails!).  I know the high point is somewhere along that ridge but it's also not marked.  If you had continued on that trail down to Money Brook, that's a crazy descent.  The climb up to Prosect from Pattison Road is also pretty intense but there's really no way to link to anything else without a bunch of pavement.  Love all these trails - awesome!

Hi Jay! I did hit the peak on Prospect, what I had intended to do was come up that "crazy descent" from Money Brook you mentioned, but somehow missed the left turn, so had to backtrack a bit to get back to the Prospect summit. It was definitely longer the way I did it, though much easier running so hard to say how much time I lost.