Mt Tam is generally done as an ascent time trial (to now FKTs are on the Strava segment).

Another variation that has been reported is the most ascents in 24 hours - you must run down between ascents, but the last descent doesn't count towards the 24 hour limit (i.e., you can stop the clock at the last summit).

The route is as follows.

Starting in the center of Mill Valley at the Depot, the Hill Climb is an open course race to the Mt. Tam Lookout Tower, but almost every Hill Climb racer takes the most direct, fastest and cruelest route. It starts flat enough, but after four or five strides the climb starts, up a small hill on Bernard Street, across Lovell and Bayview and than onto a steep set of steps that end on Summit Avenue. At the top of the steps the runner crosses Summit Avenue and turns left onto Tamalpais Avenue. Tamalpais here is not overly steep, but it is a steady climb and must be taken cautiously, because this is the easy part. The runners stay on Tamalpais Avenue for a third of a mile or so until it meets back up with Summit Avenue where the runners veer onto Summit. After about a half mile or so of steady climb on paved Summit Avenue, the runner takes a dirt trail shortcut across the last switchback of Summit and then gets on the Temelpa Trail.

Temelpa Trail starts steeply, but for awhile the trail is smooth and has steps in the steepest parts. Temelpa trail becomes progressively steeper and rockier as it goes on. Once across Hoo-Koo-E-Koo Fire Road, the trail becomes more of a wash: Eroded and rocky with roots crossing it in places. Finally the runners leave Temelpa and get in the rocky slash that goes straight up the face of the Mountain. The ever-increasing slope of the slash finally turns the runner into a climber who often must go hand-over-foot to reach the top. The finish line is the door of the Lookout Tower, touch it and the race is done.

Sea-Summit-Sea:  The Mt. Tam Sea to Summit starts on Stinson Beach at the lifeguard tower. You'll run thru the Stinson Beach Visitor Center parking lot before beginning the ascent. From here to the summit there are a variety of trails that can be used to achieve the Sea to Summit (see linked AllTrails map below for ideas). The elements of this route that should be more strictly adhered to are the start and finish. In regards to the latter, upon reaching the summit of the east peak, be sure to tag the fire lookout building. Also be sure to tag the lifeguard tower on the beach when you start and finish. The standard for this route is an out-and-back, more accurately making it a sea to summit to sea - er, ocean that is.  https://www.alltrails.com/explore/trail/us/california/stinson-beach-to-mount-tamalpais (submitted by Ben Mitchell)  15 miles RT with 3200' elevation gain. 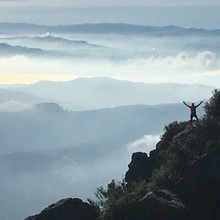 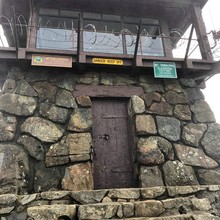 Some famous names on the top of the Mount Tam ascent leader board. The big question on everyone's minds though... can some one go under 30?

I'm going to give the sea-summit-sea a go tomorrow.