This is a pretty straightforward route that traverses a National Park (albeit a tiny one) and is a fun, very runnable 50k distance that has been done a number of times though doesn't seem to be popular. We didn't see a single person on the entirety of the Under the Rim Trail, which the park describes as unmaintained. There's certainly some blowdown in Agua Canyon (through an old burn) and a handful of washes to cross but they're easy to navigate. The run descends through into the canyon amidst red cliffs and hoodoos and then winds through forest (some dense and some open) before ascending onto red clay singletrack and finishing through the touristy hoodoo zones that are Bryce's main attraction. It saves the best views for last, but is an enjoyable run throughout.

We ran a car shuttle, leaving one car at the finish, and started at Rainbow Point and finished at Fairyland Point, taking the Under the Rim Trail from Rainbow for the majority of the time (~21 miles). We then took the Peekaboo Loop Trail past Queens Garden and got onto the Rim Trail to Fairyland Point.

*Not my documentation but this blog describes it well: http://ericjlee.com/Blogs/?p=1519

Craig Lloyd posted the same route except with the addition of the ~8 mile Riggs Loop on our old website:

"I recently ran what I have called the Bryce Canyon Link-Up. With a friend, we connected all three back country trails in Bryce Canyon and did them as a run.
We started at Rainbow Point and ran the Riggs Trail, then Under-the-Rim trail, and ended on the high side of the Fairytale Loop trail. I intended to do the lower, longer half, but my friend had a hurt knee and I was just anxious to get it over with.
I tried to do some research but couldn't find anyone else who has ever done this.

It turned out to be 37 miles.  One of the coolest runs I've ever done.

Trip report can be viewed at refusetoquit.blogspot.com/2010/06/bryce-canyon-link-up.html "

The Duathlon uses a bike to close the loop by riding the highway between the 2 trailheads.  This variation was submitted by Spencer McCullough: "I'd recommend leaving your bike at Fairyland Point if you're comfortable with that. This way you don't have to run the two miles to the visitor center. I refilled my water at the fountain at the visitor center before doing the rest of the ride back." 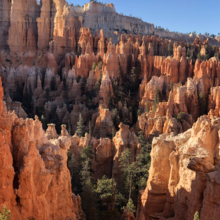 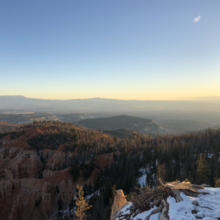 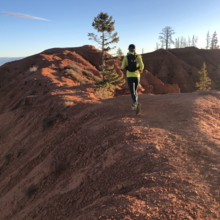 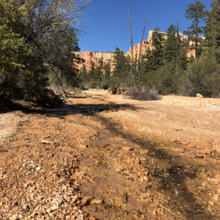 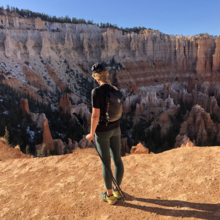 Going for it tomorrow with Jacob and Garrett

This FKT is rather soft

Going for the women’s unsupported tomorrow!