The Mesa Trail is a gem of Boulder Colorado's City of Boulder Open Space and Mountain Parks (OSMP) system. The Mesa Trail has to be one of the best and most famous short trails in the country. It runs 6.7 miles from Chautauqua Park in Boulder to Eldorado Springs Drive, following a rolling and very scenic route along the foothills, with spectacular views of Boulder's famous Flatirons. The trail was cairned in 1924-25 by Ernest Greenman and the Rocky Mountain Climber's Club. Originally, the southern terminous was in the town of Eldorado Springs, but this was changed in the 1980's due to land ownership and parking issues. However, the original alignment still exists as an "undesignated" trail. OSMP does not allow races on its property. Nevertheless, informal competitions occur from time to time, as they have for decades, out of sight of city officials.

During one of these informal competitions, on June 3, 2003, Dave Mackey set what was for over 13 years the FKT for the Mesa Trail in one direction as well as out & back. Starting at the Chautauqua ranger cottage (at the small concrete bridge) he reached the South Mesa trailhead in about 47m, and made the round trip in 1h34m29s. These times held up until Andy Wacker lowered the mark to 43m22s (N to S, starting at the gate at the bottom of the Bluebell Road) and 1h28m52s round-trip. Wacker's GPS track shows that he did not take the "Mesa Connector" shortcut near the south end, but stayed on the "true" Mesa Trail.

Of course with any classic trail someone will come up with an ultra-distance challenge. Paul Pomeroy and Mike Pont did 100 miles on the Mesa Trail in the early 2000s: 15 "laps" of the 6.7-mile trail. We do not have details such as their time or even when exactly this happened. Mike Priddy repeated the feat starting about 6pm on October 3 and ending about 1am on October 5, 2015, for a total time of 30h58m46s. Note that Priddy used the true Mesa Trail near the South TH, and did not take the "Mesa Connector" shortcut, which is about 0.1 miles shorter (and would result in a run of less than 100 miles over the 15 laps).

NOTE:  The 2020 reroute of the Mesa Trail in the vicinity of Shanahan Ridge / Fern Canyon added ~ 1/3 mile to the one-way length of the trail ! 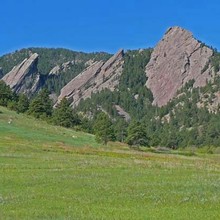 This route on the old FKT site
http://fastestknowntime.proboards.com/thread/24/mesa-trail-boulder