The Fastest Known Time Of the Year Awards are back! The intent is to inspire and learn from each other, and build our community.

2019 was very different from previous years: there were no “knock-it-out-of-the-park” FKTs. Surprisingly, there was not one single FKT on the John Muir Trail, R2R2R, Nolan’s 14, or Appalachian Trail all year, while the previous three years they totaled 15 awards! Instead, there were a lot of really cool FKTs - 664 in North America alone (!) - and mostly not from well-known professionals, but from people you never heard of. People like you and me, who believed in something, committed to it, and threw down.

You cannot come from nowhere and win the NYC Marathon, or an Olympic medal, or the NBA Finals. But you can work a regular job with a regular life, successfully commit to something, and then be recognized by a jury of your peers, as the 12 people below have demonstrated. Their stories are amazing!

Definitely click through the links for pertinent information, such as time and dates, plus good trip reports and photos by the athletes themselves. 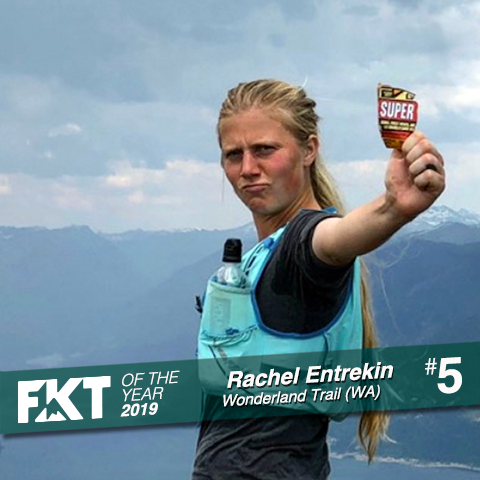 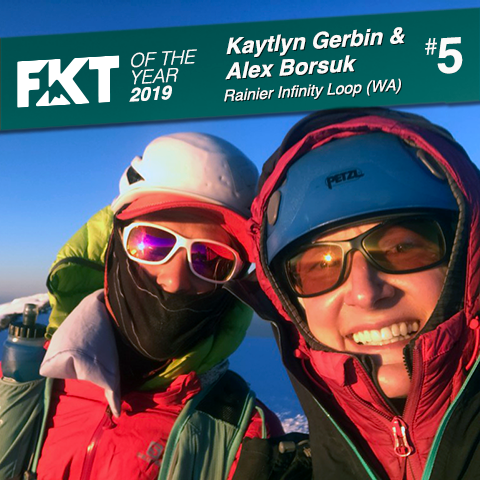 The Tie for #5 was very interesting: one person ran quickly around Mt Rainier, while the other team ran around it and then also climbed it twice!

The Wonderland Trail is iconic due to its elegant simplicity: you run 93mi around Mt Rainier. Rachel went 3h 38m faster than Candice Burt from last year, and keeping with a theme in 2019, went solo, Unsupported.

This run, unsupported, whether solo or in tandem, is amazing. There’s nothing quite like doing something completely on your own, having no one around to help you or even know exactly where you are, for over 24 hours. When I first started road-marathon-running back in 2010, had you told me one day I’d be doing a 93-mile trek in the back country woods of Washington State around one of the tallest mountains in the US, I would have called you insane. Filling up and drinking water from streams?! Trying to figure out what you *might* need during all possible weather conditions over an entire DAY (and night)?! Running almost a hundred miles, for no medal?! No glory?! No free bananas?!

“Good to see a relative unknown compared to the former holder.”

The Rainier Infinity Loop is another story from 2019 - never done until 2016, it has caught on for some reason and seen a lot of recent activity. Kaitlyn and Alex were going for the Overall FKT, but got stormed off and retreated 6,000’ down the mountain. Then with the watch still running, they re-grouped and slogged back up to finish it off.

This was such an incredible experience and we are grateful to Chad Kellog for dreaming up such an insane route. We want to give a shout-out to all previous finishers of the RIL - y'all are badass! The real crux was having us both back at work within 6 hours of finishing.

“The Infinity Loop was begging for an all-female FKT. This is a very serious, make-no-mistakes route.” 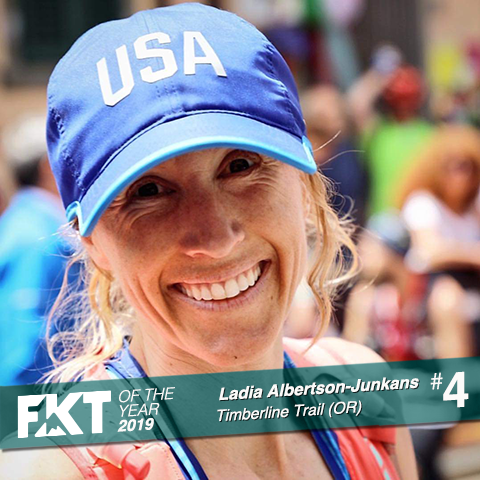 A ‘sister’ route to the Wonderland, the Timberline circles Mt Hood, another pacific rim volcano, with 40mi and 10k of vert. The FKT was suggested by the husband of Ladia’s recently deceased best friend, Gabrielle Grunewald, and was in support of the Brave Like Gabe Foundation. Ladia broke the 37-year-old female FKT that was set in a race in 1982.

The views were overwhelming, but lately I’m more overwhelmed and so grateful for the support you all have given to the Foundation. I see every donation that comes in, and every dollar means more to me than many of you will ever know. I’m so full of gratitude for all of you. But today I’m even more full of gratitude for Gabriele’s ability to find such a great group of girls to keep me going when life gets hard.

“A lesson in inspiration in many ways”

“Epic trail and elite speed make this a great FKT” 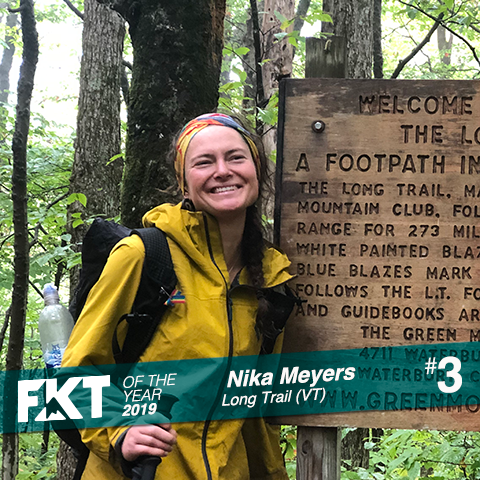 The first recorded Female Unsupported FKT on Vermont’s “footpath in the wilderness”, the oldest long distance trail in the US. The Long Trail crosses Vermont from Canada to Massachusetts, 272 miles border to border, going over all the main summits. With more than a few spots of mud and roots.

To say that I was “Unsupported” is silly in the sense that I could not have completed this journey without the love, inspiration, and encouragement from so many incredible people that I carried in my heart or whose footsteps I followed in. Thank you! I am beyond lucky. It does mean I carried all my food and supplies from the beginning and accepted no support along the way.

“Unsupported on the LT is gnarly, and she did it with a smile!”

“4 months earlier she would have beaten the Mens Unsupported time that stood since 2010.”

Notice that none of these three FKTOY efforts were done on the biggest marquee routes, and none by the marquee names in the sport. Going into 2019, seven athletes had the distinction of being nominated more than once, and none of those seven were nominated this year. Of the twelve 2019 nominations, only one is a professional athlete. Newcomers and amateur athletes gave the voters the amazing efforts to choose from. And important note: EVERY one of the 39 Nominees received votes! There definitely were no "losers" in this process.

This resulted in very close voting. In the past, we had a good idea what was going to be #1, while this year, the female #1 was not decided until the last person voted. And #2 to #5 male had only a 10% separation on vote totals. Let’s look at the men. 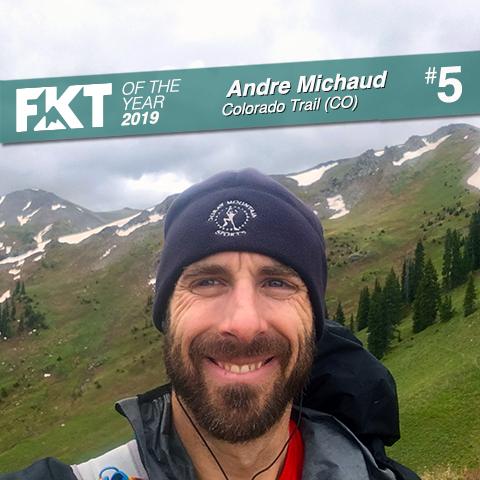 Andre did the fastest ever Self-Supported time, which is the classic thru-hiker style - you purchase or pick up supplies but no one supports you, which means taking care of yourself, cooking and carrying your own food, and sleeping on the cold hard ground. The result is a fine style and 23 hrs slower than the Supported times of Bryan Williams and 10 hrs slower than Jonathan Basham's time on this route variation.

The “worst” climb of the week was the last. Its “easiness” drove me batty. I kept going and not making any progress. I kept checking my Guthook app to make sure I hadn’t taken another trail. I just wanted to be done! I arrived at the Junction Creek TH at 0416. Alone, nearly emotionless. Several minutes later, my best friend came careening into the parking lot. My buddy was crying, I was shell-shocked. We hugged and his wonderful wife made me a real breakfast.

“The was the "classic thru-hike" FKT of the year.”

“Glad to see another super effort on this trail, and that the attempts aren't slowing down.” 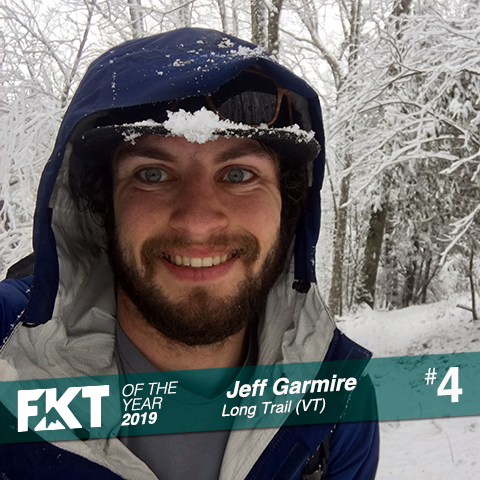 (See #3 Female for more on the Long Trail.) “Legend” was the most prolific thru-hiker this year; during a 3 month span he set FKTs on the Arizona Trail, on the Pinhoti Trail, then this one (followed by two more in Costa Rica). His AZT was broken 6 months later by Josh Perry (see next week’s awards!), then Jeff bettered Josh’s Long Trail FKT 5 weeks after Josh.

I have not met Josh, but it was pretty cool to work off each other's success this year to put up some good times. We have traded messages a couple of times and we have some similar future goals, so it will be fun to watch. It is a coincidence this year, but I am sure our goals will cross again in the future. I would be interested to hear what Josh thought since in my mind the main competition in FKTs is within.

Listen to our Podcast with Jeff:

"I work it out so I can go for hours without even taking off my pack - bending over to get water out of a stream takes time."

“Unsupported in under 6 days? FKT of the Year to me.” 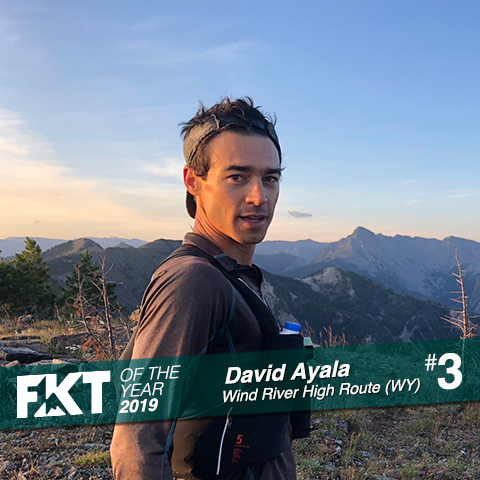 The Wind River High Route was designed after the Sierra High Route. It was scouted multiple times, and then plotted on a map to traverse the entire Wind River mountain range while staying as high as possible, but not so high as to require 5th class rock work. It’s likely one of the 10 best routes in the world in its class.

Approaching this as a "run" could be dangerous. I ran about 25% of the route, the easiest parts. Most of the route necessitated route-finding, scree climbs and descents, boulder hopping, glacier travel, snowfield ascents and descents, and concentration & will. The respective hazards of such terrain include getting thoroughly lost, rock slides, ankle/leg injury, crevasses, avalanches, sliding out-of-control across snowfields, and losing the capacity to make safe decisions.

Ascending and descending Wind River Peak was, by far, the most challenging section for me. I became psychedelically delirious with unorganized pure perception, augmented through vivid synesthesia. It took an unnatural type of will to conjure adequate focus to safely descend the summit.

“Few people will understand how fast this is…”

Stay tuned for next week: #2 and #1 Fastest Known Times of the Year!

David Ayala: “FKTs never crossed my mind until this past August. It’s since redefined my imagination, which has been exciting. I really appreciate the FKT site, with the relatively non-branded demeanor and corresponding community it frames, encouraging ample creativity.”

Nika “Early Bird” Meyers: “There are many wonderful FKTs this year and I am lucky to be a part of such an incredible community. I very much enjoy listening to the FKT podcast and following along other’s adventures. It is an awesome space you and your team have created. Thank you again and look forward to learning more about other FKTers who are on and off this list in 2020 :-)