Kilimanjaro (19,341') is the highest peak in Africa, and the largest volcano in the world. Nevertheless, the hike to the summit is technically quite easy, really just a trail hike. The peak is a major tourist attraction, attempted by thousands every year. Most take the long (23 miles one way?) and well-groomed Marangu Route (aka "Coca-cola Route"), but there are numerous other routes on the mountain.  Faster times have been set on the shorter routes, such as up Umbwe & down Mweka (see our map below).  A couple people have gone up & down Mweka.

Speed records on the world's big peaks, including Kili, have been frought with accusations of fraud. Many of the players have a financial stake in a high-profile speed record. Generally, it is easier to cast doubt on someone's accomplishments than to actually set up a solid verification system for your own trip. It depends on how important it is to you that others believe what you say you have done.

The logistics of a fast trip on Kili are difficult. The mountain is in Tanzania's Kilimanjaro National Park. We were told by a Tanzanian guide who lives part-time in the US that "The park authority... [does] not allow any adventure activities" (meaning, speed climbs). However, this conflicts with what we were told by an employee of the park authority immediately following our climb of the peak in January 2007. The Tanzanian guide, who frequently leads trips on Kilimanjaro, also told us that the minimum fee just for the permit would be $642 per person, which is more than we ended up paying for our entire trip booked with Zara through Adventures Within Reach. As usual in the Third World, accurate information is nearly impossible to come by.

Official rules appear to be that all climbers must be accompanied by a guide, who is required to carry supplemental oxygen. There are check points along the way, and unaccompanied climbers may well be stopped, as we were when we tried to leave Kibo Hut (15,500') without our guide, who had fallen behind by over 90 minutes. Convincing a guiding service that you want to climb, and are capable of climbing, the peak in less than the standard 5-6 day trip can be difficult. In any event, once on the trail you are basically at the mercy of your guide. Also complicating matters for a fast trip, entry into the park it not allowed before the 6:00 a.m. (or however long after that time you are able to get checked in with the park authority.) If you want to just show up and climb Kili, as we did, it can be quite difficult to negotiate, and remarkably expensive in a country where the average wage is just a few hundred dollars per year.

Team Kilimanjaro appears to set up trips specifically for speed climbing. They claim several speed records on the mountain have been set by their guides and clients. 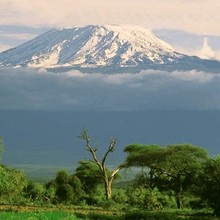