The Tahoe Rim Trail (TRT) is a 171-mile long loop trail around Lake Tahoe. The "grand opening" celebration for the TRT was in September 2001. The TRT has seen many speed record attempts -- a testament to the quality of the trail as well as its location near to the hub of ultrarunning in North America. An interesting feature of the trail is that, since it is a loop, one can choose basically any starting/finishing point, and can run in either direction (clockwise or counter-clockwise). No doubt different runners will have different ideas on the most efficient approach.  Note that like many trails the TRT has gotten longer (and better!) over time as road sections are replaced by trail.  When Kilian did his FKT in 2009 the route was about 165 miles. 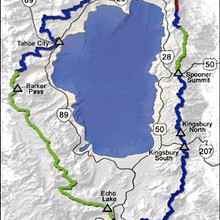 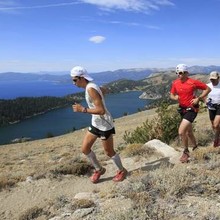 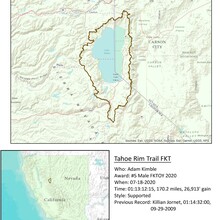 This route on the old FKT site
http://fastestknowntime.proboards.com/thread/36/tahoe-rim-trail-ca

I will be starting on July 1st, at 8:00am PST Time, a FKT attempt unsupported on the Tahoe Rim Trail.

My primary goal will be to try finishing the loop in less than 2.5 days, and best case improve the time from Sean of 51h45min.

My attempt can be followed at the following link: https://spotwalla.com/tripViewer.php?id=1991f5b27eba2d0f0d

p.s.: Blue dote on the map can be clicked to check my progress compared to Sean's time.

Looking forward to that,

Admin note:  Looks like Aurelien did not complete the route.

Following my last attempt were I got sick, I will give another try this friday july 13th starting around 4am PST time.

I have changed few things from the the last failure: no chili con carne the day before, 2 liters of water instead of 1, better clothes against the heat, less fatty food to eat on the trail.

- It is hard to admit, but maybe one mistake was to think I could do it, while this challenge is maybe to tough for me. Everyone should dream big, but should be ready to fail and plan accordingly. If there is a next time, I'll need to train a lot harder.

- I got sick very early on my first attempt due to heat exhaustion, and same issue on my second attempt after 60miles and 15hours. Not being able to eat and drink much did not help my body and my legs to keep the pace and to recover, even though I still dont know if this is the main issue, or if I am just too weak overall. If there is a next time, I'll go with a perfect cloudy cool weather in august or september.

Having a hard time to accept failure, but still think those experiences are a great way to learn about myself.

Is there a women's unsupported record?

I would love to know the answer to this too!

I have just submitted my self-supported report here:
https://flowandfocus.com/tahoe-rim-trail-fkt-report/

An unsupported lap would be extraordinary challenging, but I'm sure that one of us will be up for the task!

My name is Adam Kimble and I set out last weekend (10/11/19) to break Kilian's Tahoe Rim Trail supported record from 2009.  While I didn't succeed in breaking his record, I did end up finishing with the second-fastest known time ever!  My total time was 45 hours, 36 minutes and 36 seconds.  My total mileage with all of the TRT trail updates over the years came to 172 miles.  Here is a link to my Strava data (https://www.strava.com/activities/2787213695) for verification.  I can also provide my GPX file if that's helpful.

I look forward to taking on this FKT again in the future! Cheers to chasing records!

As a follow-up, I was informed there was another time of 45:34 run in 2012 by Tom Flahavan.  However, I believe my time is still the second-fastest ever, given that the course is about 7 miles longer now than it was then.

I'm planning to go for the supported FKT tomorrow morning starting at 6am! I'll be starting from Big Meadows Campground and will go clockwise just like Krissy in 2015.

Looking forward to spending some fun miles on the trail with my awesome crew.  You can follow along at this link: https://guenergy.com/magda-goes-for-the-tahoe-rim-trail-fkt/.

Rooting for you, Magda!  Go get it!

Tom Flahavan ran the entire TRT, fully supported with pacers and crew, in the 2nd fastest time as of August 5, 2012. Started at Spooner (Hwy 50 just past Hwy 28) on Friday 8/3/12 at 4:50 am and finished at Spooner on Sunday 8/5/12 at 2:24 am, traveled clockwise.
See attached image of xcel file showing segments (mileage taken from TRT online info available in 2012) with start/finish times for each. According to the trail info in 2012 the route was 169+ miles (not sure if that includes the distance between each trailhead when you cross a street or go through Tahoe City).
Tom is friends with Tim Twietmeyer and he received a lot of helpful beta before his adventure. Without the info and support from Tim, he doesn't think he would have done so well. Tom noted that there were some sections of trail different than when Tim did it - for example, Kingsbury south, was all on singletrack for Tom - for Tim, it was through a neighborhood.

I met Tom during a long run while he was pre-running sections of the TRT in June of 2012, along with his good friend (and one of his pacers for the thru-run) Jared Gagnon. We shared a few hours together that day, I let them know I was training for my first TRT100, and Tom casually mentioned he was planning to run the whole TRT, a "bucket list" item for him for many years.

Over the summer we kept in touch and when August 3 rolled around, Tom's wife posted updates on Facebook so others could follow along. Well, things went better than expected and Tom did it super fast in 45:34, with the support of many pacers, crew, and friends. Tom was not a professional athlete; he was a full-time CHP officer at the time (he's since retired); just a really nice guy grateful for any moment he could get on the trails.

I didn't realize what a "big deal" it was until around a week later when four runners (Adam Hewey, Victor Ballesteros, Gary Gellin, and Ben Lewis) set out to run what they were calling the #TRT165 (even though it was over 169)- there were podcasts, news stories, LIVE TRACKING, etc, and as it turned out, 3 of 4 dropped and the one person that finished was Victor, in 53:03. But there was little to no mention of Tom's remarkable feat in all of this hoopla.

Anyways, I think it's about time that Tom gets some public credit for his accomplishment. He did it for personal reasons, sure, but it would still probably be nice to see his name on the leader board where it belongs. 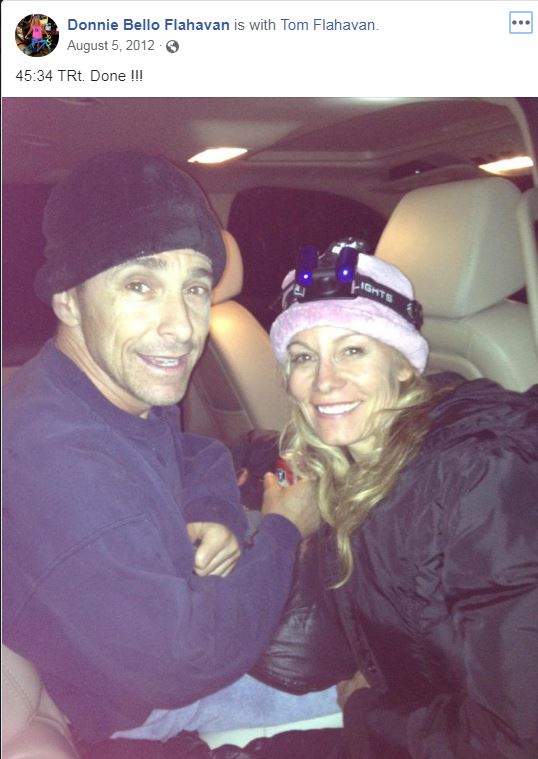 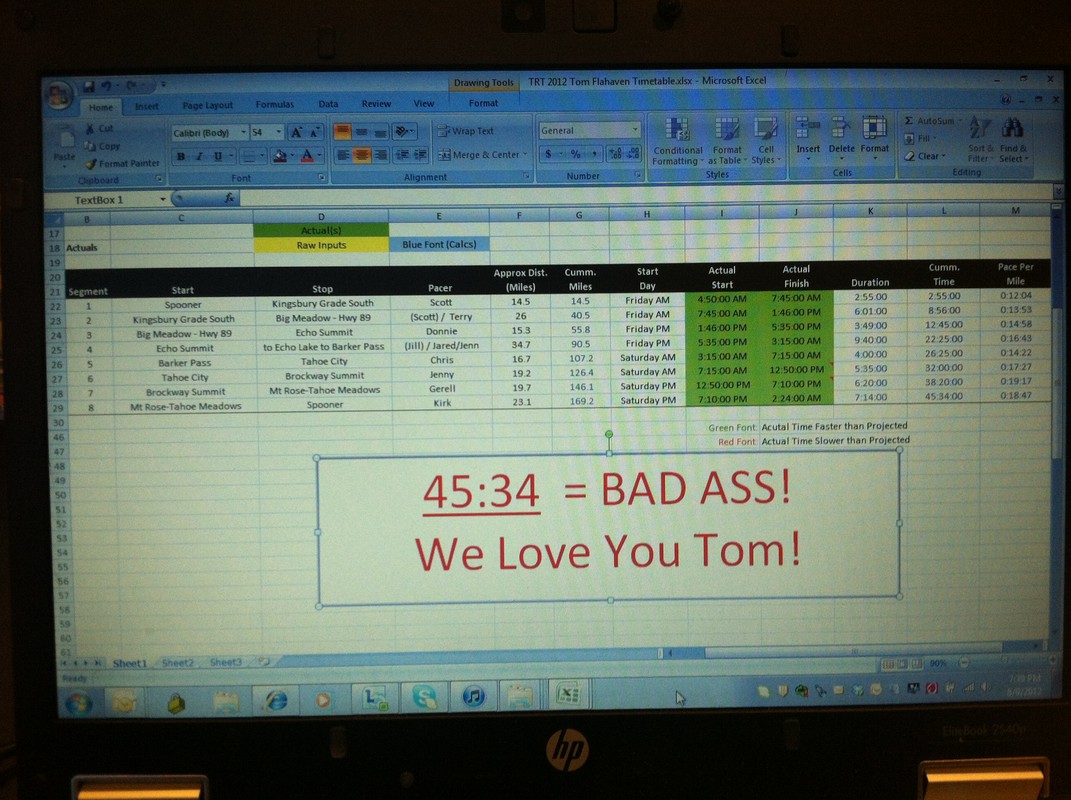 I agree...amazing accomplishment by Tom!  And I love that he did it under the radar, without any recognition.  Respect!  I was talking with Jenelle a lot over the last few days, as we were trying to figure out when the mileage additions were made to the TRT.  It looks like Tom ran a total of 169.2 miles?  Is that correct?  The updated maps from the TRT (and Guthook app) show that it's currently 171.2, but my final mileage from last weekend was just over 172.  I believe they added a few sections of small switchbacks in 2019.  Anyway, congrats Tom!

Hi Adam! Tom got those mileage numbers for each section from the TRT book or website that was available at the time. I'm not sure if his pacers kept track of each sections' actual distance for comparison? You guys should chat sometime. I'll send you both an email. Congrats on your incredible run, Adam! Very inspiring to follow along, and I look forward to seeing you go after it again.

I plan to make a solo unsupported TRT attempt in the next week (watching weather window.) The trail is substantially clear and water is flowing well. There are still very long dry stretches on the East side and the pump at Marlette Campground is broken, so the weight to carry in water is daunting. Regardless, the mountains are calling and I must go!

Hi, all!  I have completed my unsupported lap around the TRT and will submit my official time and report ASAP! Congrats to Fran from getting out there and finishing! And best of luck to Candice out there now!

My name is Jacob Cooper and on Thursday, July 2nd at 8:00 am PDT I will be starting an attempt to complete the Tahoe Rim Trail unsupported. I will start at the Truckee River bridge in Tahoe City, CA and I will be traveling counter-clockwise around the lake. Per the standards of an unsupported run, I will carry all of the food that I will need with me, I will filter drinking water from natural sources along the trail, and I will not have any pacers or companion runners for the duration of the trip. I will be carrying a Spot Tracker which should provide live-tracking, and I will be recording the run with my usual Garmin Fenix watch and uploading to Strava.

The purpose of this run is to honor the memory of my grandfather Edwin Cooper, who first taught me to love and appreciate nature and the outdoors. He passed away from Alzheimer's Disease on April 29th. I'll be raising money fo the Alzheimer's Research Fund through the GoFundMe link provided below.

Update: I made the difficult decision to stop after 68 miles after running from Tahoe City to Big Meadow. After about 12 hours my stomach turned and I wasn't able to eat much at all. I pressed on for another 8 hours or so, but when I reached Big Meadow it was clear that my day was done.

Best of luck & I hope to see you finish in TC in a few days!!

On July 3rd I set out unsupported for an FKT attempt on the TRT. My verification will have to be a patchwork of information. I have a gpx route from my Suunto 9 that captured 90% of the route. I carried a spot tracker that failed about halfway through, but the one aspect that was consistent was Luis Escobar was there to document the effort. We have time-stamped pictures from all the major road crossings and finish. Luis, Helen Pelster, and others were there at Echo Lake Summit to verify my 11:09 pm finishing time as well.

I carried about 10k calories from the start along with a water filter and the rest of my running gear and took no supplies along the way. Helen was kind enough to remind me that I couldn't discard any trash either for a true unsupported record, so I did that as well.

I'm still a bit dead from the run and drive home but will update with the needed info shortly.

Big thanks to Adam and Helen and all the other people who were so helpful in figuring out the logistics of this route.

Hi Y'all! Corrine Malcolm here, I've been trying to make an attempt first supported, then unsupported, now supported again (third times the charm hopefully) to run the TRT. I will be starting tomorrow on 10/18/2020 at 6:00am from Tahoe City running clockwise. Hoping to sneak under Krissy's time, since I've been tapering accidentally for like 6 weeks hopefully I'm ready! Here is my tracker link: https://maps.findmespot.com/s/1C7R

Hello All! I will be running/hiking/crawling from Tahoe City clockwise back to Tahoe City starting at 6:00am or so on 6/17/2021. Here is my garmin tracker:

PS. This will be supported

Hi, I’m planning on starting an unsupported attempt tomorrow June 22 from Spooner. Was planning on going two weeks from now, but all the water is quickly drying up. As I’m going to be out there alone I’ll post tracking when I finish. Hopefully 5 years and 2 kids later my body still remembers how to do this stuff.

Well, my knee decided I was done at 100 miles. Had a beautiful run, but it might be next year before round 2. A lot of seasonal creeks are already dry. Zero snow on the trail.