The Lost Coast is a stretch of California coastline so rugged that roads have not conquered it. The remoteness is a rare respite from the rest of the state. There are no mansions tucked along hillsides or congested lines of traffic winding along the cliffs. Here crumbling gashes of the King Range tower from the sea, blocking the way of everyone not on foot.

Between the cliffs and the sea, the Lost Coast Trail passes along the narrow band of tortured beach. It is the domain of the hiker, a desolate and severe landscape draped by a pristine ecosystem. The path leads from hidden beaches to expansive vistas at dizzying heights above the surf. Apart from sea lions and the occasional troop of Scouts, hikers discover pure solitude. The Lost Coast Trail is one of the finest beach backpacking trips found in the United States, and it has steadily grown in fame and popularity over the years.

Often the trail is no more than a foreboding band of beach that vanishes into an oblivion of marine fog. Twice per day, there is no Lost Coast Trail. Stretches of the route vanish under the high tide, replaced by surf pounding against the cliffs.

The Lost Coast Trail skirts the coast of the King Range National Conservation Area. This is the western edge of Humboldt County in Northern California. To the south of the King Range, Highway 1 veers eastward, blocked by impassible slopes near Rockport. If you were to fly a plane up the coast from here, the next coastal highway you would spot is at Ferndale, roughly 90 miles north. Between lies the longest stretch of undeveloped US Pacific coastline outside of Alaska.

The southern Lost Coast Trail continues further into Sinkyone Wilderness State Park, eventually reaching Usal Beach, about 32 miles from Black Sands Beach. The sheer cliffs of the next stretch of coast are inaccessible by foot, so the trail begins inland several miles east from Shelter Cove, and doesn't return to the coast until near Needle Rock. Sinkyone State Park has tighter regulations than the BLM. Dogs are not allowed and camping must be within designated areas. The southern Lost Coast Trail rarely touches the beach, staying inland and skirting the tops of the bluffs most of the way. It is a beautiful hike, but it is not top-shelf like the northern section. 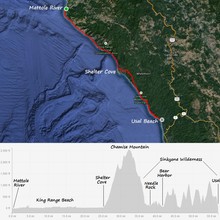 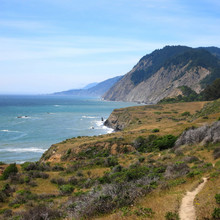 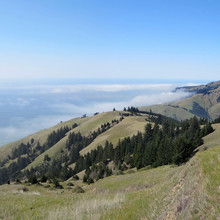 This route on the old FKT site
http://fastestknowntime.proboards.com/thread/532/lost-coast-trail-ca

During my research I have found that the actual Fastest Known Time for the North Section is, as follows:

I got to thinking that he couldn't have run the North Section slower than 4hr 38min to pull of his 10hr 10min of the full trail.  SURE ENOUGH, it is clearly documented in his write up and in his gps data that he went from Matthole to Black Sands Trailhead in 3:51

As such, I will be attempting to beat Jeff's time and not just Kevin's, which is intimidating since Jeff and I ran together a bit while he was on a temp position with Fish and Wildlife in Klamath Falls, Oregon.  He is a vastly superior athlete to me in speed and raw fitness. Lol, we climbed Mt. Shasta in a half-day once (starting at 11:29am), after closing out the bars, 100 miles away, the night before (or should I say the 2am morning of)...my only hope to take down his north section is that, well, he was pacing himself to hold on through the much more brutal southern section,

which gets me thinking about my motivation...

I have been wanting to attempt this trail since I shuttled Ashly Winchester for her Full Trail FKT on it, but I discovered my body cannot deal with the amount of poison oak in the southern section when after a small run down near USAL Campground I had massive reactions all around my body from coming in contact with it...So just the north section it is...plus kowtows to Jeff, I don't think I am that fast.

Who doesn't want an excuse to go to the beach and time the tides in a game of life or death...lol.

Well, I wanted to formally state the old-new Fastest Known Time by Jeff so that it is up there, whether I get this or not, and make my announcement. so there...

Jeff’s pace on that terrain was brutal.

held on for about 7 miles, missed a chance to get on solid trail ended up on a boulder strewn stretch of beach instead, mentally popped, found the trail, tried to get back on pace for a few miles then the surface went back to deep sand and I physically popped. To put the nails in the coffin, I got chased for at least a freaking quarter mile by two Turkeys ? ? who were on a kill mission for me. I got big, yelled, threw a rock, they kept on coming at me...And boy can they run. I had the presence of mind to check my watch while blasting away and I was sustaining sub 6 paces and they were still giving chase but not right on me anymore...not what I expected to be the primary memory of this experience.

after about 18 miles, I chose to just walk it in enjoying the views, sleeping sea lions, and a small lighthouse.

all in all, a wonderful day. Hats off to Jeff Mogavero!

Today is 5/21/20 Thursday. Today, I will be traveling from San Francisco California up to the Humboldt County Area California for one of the following FKT Attempts sometime between 5/22 and 5/25 Memorial Day Weekend.

#3) Set an Only-KT in the Avenue of the Giants trails that run parallel to the main road. The race course marathon records are here: http://www.theave.org/Images/CourseRecords.html. No record is shown for the trails along side it for the whole 31 miles however, which if i can find a main trail, would be a beautiful run.

I plan to submit my GPX, Strava, and Garmin connect data. I will attempt to live track via sending a link with the live track link via Garmin to the FKT inbox Contact page.

thanks! let's see how it goes.

Idea after brainstorming with roommates:

Okay, one final correction. It appears after extensive mapping and understanding of support/sag vehicle availability from my roommates (thanks guys =] ), I will not be able to attempt one of the Lost Coast routes I commented above.

Instead, I will try to set the 3rd option above:

#3: Set an only-known trail route time, from the Northern Entrance to the Southern Entrance of the Avenue of the Giants, running on the trails parallel to Route 254.There are many recorded road marathon times, but no full 31-mile trail times. I plan to map and find the most runnable route from north to south. Wish me luck. This will be a speedier run and I hope to set an aggressive time.

One of the key pre-requisites to start a new FKT Route is to make it "The route is notable and distinct enough so that others will be interested in repeating it." I would argue the Avenue of the Giants is an exquisite trail spiderweb just off the freeway and I think it is well deserving of its own unique trail FKT Route.

I will map my run via Garmina Fenix 5 smartwatch, upload the GPX, try for live tracking via Garmin Connect. My attempt will start on 5/22/20 Friday.

I wanted to make my intention known that I will be attempting an unsupported solo North to South FKT of the entire Lost Coast Trail on August 22nd.

I will start around 5 am to beat the high tide on the beach section.

I will be using an Inreach Mini for live tracking follow along:

Let's see how the cards fall!

Awesome Troy! It's quite the adventure and really beautiful! Stoked to see someone give this a go!

Okay, so that was a lot harder than I thought it was gonna be.

I competed the Lost Coast Trail from Mattole to Usal last Sat the 22nd in 17 hours 34 min 31 sec.

I set out from Mattole at 5:11 am and managed to time the beach section perfectly finding all of the hard pack trail sections with only a few minor hiccups and getting to run the impassable sections at the lowest part of low tide so that most of my beach running was on hardpack wet sand.
My goal was to try to finish the beach section in 5 hours and push hard giving myself a solid 7.5 to 8.5 hours to get from Shelter cove to Usal.
The Beach section of this route is a deceptive meat grinder and while I managed to keep the running to a somewhat easy pace it chewed up my legs pretty good.
On the road climb out of Shelter Cove, it took quite some time to find my legs again.  I just had no climbing gear and ended walking the majority of the road section.
Once I was back on the trail I managed to get it to a good grove till the wheels started to fall off around mile 44.  The Sinkyone wilderness section of this route is rugged and relentless and I loved every second of it.  It is switchback city, with lots of bush watching on what is no more than a glorified game trail covered with poison oak.  ended up hiking in the last 5 miles by route finding via headlap in the dark.

Saw Sea Lions, Bear Tracks in the Sand, the Largest Bull Elk I have ever seen standing 20 ft from me waiting patiently at dusky twilight behind a tree for an opportunity to drink from the creek once the group that was camping there had settled down.

Quite a few lessons learned, I will be back to give it another go now that I know what I am up against:)

Headed back to the Lost Coast

Sunday, July 25th my intention is to set an Unsupported FKT on the full Lost Coast route.

See you on the other side:)

On Thursday 8/12, I will be embarking on a Lost Coast Trail out and back supported adventure. The plan is to start at Mattole Beach around 5:00am. I’ll have my husband with me for maybe all of it, and a friend at Shelter Cove and [hopefully] Usal Campground. Timed out the tides, allotted breaks for ample fueling… ready to get after it!

Whoops! Belated update: Out and back wasn’t in the cards for me this day. Made it one way mostly solo (husband trailed pretty far behind for the first 25– running in the sand isn’t his jam), had a lovely refuel and change of shoes at Shelter Cove and set out for the Southern section alone. I was moving much slower than I had originally mapped out, and when the sun set with ~18ish miles left to get to the Usal Campground turnaround my pace turned to a crawl. The trail was challenging to spot in overgrown sections and I was hyper focused on not getting lost (with no service or spot tracker… note to self: GET A SPOT TRACKER!). I was fine and continued to enjoy the challenge (and massive elk!!!), however when I arrived at Usal my husband and crew member had absolutely freaked themselves out. I was way off my goal pace and they assumed I had died. ??‍♀️☠️??‍♀️ They did not want me going back out alone. At this point catching the low tide the second time might not have happened. The attempt was called, and we had an AMAZING breakfast in Garberville at the Eel River Cafe!!! Highly recommend if you’re in this neck of the woods! I’d love to try this again but with either more support or a legit tracking device.