Mauna Kea (13,796 feet) (or Maunakea, which is the accepted Hawaiian name for the mountain/volcano, as suggested by the Office of Maunakea Management: “Maunakea is a proper noun—the name of the mountain on the Island of Hawaii. This spelling is found in original Hawaiian language newspapers dating back to the late 1800s when the Hawaiian language was the medium of communication”) is the highest point in Hawaii, and the highest point in the Pacific. If you count the part of the mountain that is underwater, it is the tallest mountain in the world!

NOTE:  In order to respect the cultural and religious significance of the summit, for any of the route variations you do not have to go to the actual summit, and you are requested not to.  For purposes of any FKT the route either ends (ascent only) or turns around (up & down) near the Visitor Information Station at the sign discouraging visitors from going to the summit.  Another relevant link about the cultural significance : https://www.honolulumagazine.com/the-sacred-history-of-maunakea/  Thanks to mlkieborz for making us aware of the cultural significance and request that visitors not go to the true summit, as well as the Hawaiian name of the mountain.

Most hikers start from the Ellison Onizuka Visitor center at 9,000 feet elevation on the south side of the peak, which is accessible by a paved road. Above the Visitor Center, a 4WD road continues to the Mauna Kea Observatory, just below the summit. Hikers use the Mauna Kea Trail (aka Humu'Ula Trail), which follows an abandoned dirt road, to ascend 4,800 feet over 6 miles to the top.  For some reason though, earlier FKTs (up to & including Mike Popejoy) were done using the auto road (also starting at the VC), which is longer but maybe faster?  Either route is valid for the FKT.  The Humu'Ula Trail (plus the last 1+ mile to the summit) has a Strava Segment.

Mike Bailey reports having run from the Visitor Center to the summit and back, via the auto road, in 4h "give or take a minute", on Sept. 16, 2007. According to Bailey, the road route is 9 miles each way. He started his run at 11:20 a.m., reached the summit at 1:55 p.m. (2h35m), and ran back down the road, arriving at the Visitor Center at 3:20 p.m. (1h25m). "Mauna Kea does not have record of a faster circuit time, although elite athletes should be able to go considerably faster. They just need to vacation in Hawaii more," he said. His blog post on the trip, written 2 years later, is here.

Bailey explained some of the difficulties of ascending Mauna Kea on foot: "Unlike other mountains, like in Colorado, you are already at 6,000 ft when you begin your attempt. Thus, you have already spent time acclimating to the altitude. Most visitors, like myself, in Hawaii begin their day at sea level. My body experienced 0 ft to 13,796 ft in under 6 hours. This can cause numerous health problems, and thus the many stern warnings to visitors about hiking even a small part of the trail. Aside from the altitude issues, it is a very steep trail with a lot of climate change. The temperature during my run varied from 70 degrees at the start to 36 at the summit, with wind, fog, and rain." Bailey chose to use the auto road route, instead of the considerably shorter hiking trail, because "I guess I wanted to try the longer route. Ultrarunner mentality. If there's a shorter way, don't take it." "My wish is for runners to see my time, and set out to break it," Bailey added. "Plus I can't think of too many more beautiful places to run."

Another challenge that has been done is to run from "Sea to Summit", starting from Hilo and running to the top, about 70km.  The fastest time (10h3m21s) is documented in this video, but the runner chooses not to be recognized here.  A longer (90km) "Sea to Summit" route starts from Anaeho’omalu Bay on the west side of the island.

Ascent from Hamakua Coast (24 miles / 13677' gain):  A more adventurous option is to ascend to the summit from the Hamakua Coast.  This is the shortest and most direct possible route from the coast to the summit of Mauna Kea, with a total distance of 23.75 miles. This route starts near the community of Pa'auilo on the Hamakua Coast, and begins at the lowest possible elevation one can get to at about 225' above sea level, as there is no access to the ocean along this stretch of coastline. The route begins in a sugar cane thicket on an abandoned dirt road about 1.5 miles northeast of Highway 19. From the sugar cane thicket (where vegetation prevents you from going any further north toward ocean), you proceed the 1.5 miles to Highway 19, then head south on Kalapahapu'u Road into the Manowaiale'e Forest Reserve. At just under 6 miles from the start, you depart the paved road and head left onto a dirt cattle trail, and continue south and up the mountain toward Mana Road. At Mana Road (about 10 miles into route and 5,400' above sea level), turn right and proceed west about 0.8 mile, then turn left and proceed south again up a trail that passes an abandoned barn and heads toward a satellite tower on top of a hill that is visible from Mana Road. Once near the satellite tower, proceed along an abandoned paved platform covered with tarps. Once past the platform and tarps, you will see an abandoned cabin and barn next to the Mauna Kea Forest Reserve (about 14 miles from start and 7,800' above sea level). Proceed along the edge of the forest reserve and continue following the trail up the mountain. At approximately 15 miles, take a shortcut by turning right to leave the trail and proceed uphill 1/10 mile to access the Kealiali Trail (no sign). Once on the Kealiali Trail, turn right and head north for about 100 yards, then turn left and head southwest onto a very faint trail that becomes a more prominent trail with the disappearing vegetation. This trail heads into the barren lava fields and cinder cones, and connects with the Mauna Kea Umikoa Trail (again no sign). Veer to the left onto the Mauna Kea Umikoa Trail and proceed between two cinder cones, maintaining a southwest direction. The trail will disappear at approximately 18 miles from start at an elevation of about 10,700'. Continue heading southwest between more cinder cones and you will see the telescopes and Mauna Kea summit at approximately 21 miles from start. The terrain gets progressively steeper and rockier toward the summit, but then turns to soft volcanic scree on the final climb up the summit cinder cone to the Mauna Kea Summit Trail just shy of the summit. The final climb through the scree is very difficult and progress is slow, and the last 1/8 mile up the Mauna Kea Summit Trail to the summit seems easy by comparison. The total distance from start to finish is 23.75 miles with an elevation gain of about 13,677 feet.

Ascent from Waipio (58 miles, 18,000 feet of elevation gain):  This route takes you from the black sand of Waipio, through the pastures of Waimea, around and then to the top of Mauna Kea. It showcases the diversity of the Hawaii Island by taking you through a significant number of its many biomes. The route primarily involves dirt and gravel jeep trails, though it also includes a limited amount of road (about 6 miles with shoulder), single track (about 6 miles), and about 5 miles through pasture (which may be private lands). Pictures from along the route can be seen at https://www.facebook.com/mark.ravaglia/posts/3548818798487732. While this route (and its small variants) is the only primarily trail ocean to summit route for Mauna Kea, the purpose of the route isn't just the ascent. It's about experiencing the land in its many forms. Each of the segments is stunning in its own right. The route was thought up by Sylvia Ravaglia who while running through Waimea was killed by a car on 1/1/20. She joking referred to this route as Sylvia's Hawaii Island Traverse (or s.h.i.t. run).  The route begins at the far end of Waipio. After crossing the beach and then the stream, you climb out of Waipio and proceed to Mudd Lane. Mudd Lane takes you to the Mamalahoa Hwy, where you turn right (towards Waimea) until you reach Mauna Rd. After turning left onto Mauna, you proceed on Mauna until the road turns to gravel, and then after approximately six miles you turn right (just past the Mother's Day Gate) following the pasture trail to connect with R9 and then R1. After you turn left on R1, it is approximately 22 miles to the Mauna Kea visitor center, at which point you can take the Mauna Kea summit trail to the top. 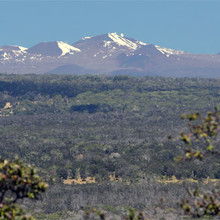 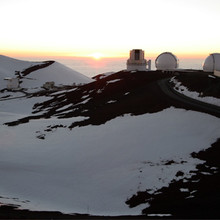 This route on the old FKT site
http://fastestknowntime.proboards.com/thread/57/mauna-kea-hi