The White Mountains Hut Traverse is a gnarly 49-mile route that links 8 huts operated by the Applachian Mountain Club (AMC), between Carter Hut and Lonesome Lake Hut. Fast trips on the route go back at least to the 1930s (see below, and this site, and here). Until recently, Matthew Cull was thought to hold the fastest time, 13h9m set in 1993. Cull obtained signatures from the crew at each hut along the way, and his progress was monitored by the hut crews via radio. He published an account of his trip in the Dec. 1993 - Jan. 1994 issue of Running Wild magazine, which is posted at the bottom of this page. Cull believed the previous record to be 14h05m, set by Bob Biddle in 1981. [Biddle confirmed this as follows (2020): "I did do a hut traverse in 1981 which was fast for back then. Four of us started together, all from the AMC trail crew, three guys and one woman, and all four of us finished, but I finished first. The woman Leslie Wright finished in around 17 hours which might have been the women's FKT back then. We started at Carter, ended at Lonesome, and did take breaks and got help - food - drink at the huts, which were included in the overall time. We skipped Pinkham as it is not really a hut."]

In 2007 it was reported on the Views From the Top forum that Alex MacPhail had run the Hut-to-Hut in a time of 12h11m, set when he was a hut "croo" person way back in 1963! Later, in 2010, MacPhail wrote a history of the Hut-to-Hut traverse (whitemountainsojourn.blogspot.com/2010_08_01_archive.html), including earlier speed records and a detailed account of his own 1963 trip. However, there are discrepancies in some of the details (splits) reported by MacPhail in 2007 and 2010. In an email exchange with me, MacPhail explained that he never intended to claim a record for the traverse, and had done his run purely as a personal challenge and for training. He explained that some of the details were from memory, which was obviously subject to error after 45+ years. He did indicate that the total time of 12h11m was accurate to the extent that his watch was accurate. Finally, MacPhail said "I do not feel comfortable with anyone using my time as 'the record' ".

On this page, Jeff List discusses some more about the Hut-to-Hut route & times. Importantly, he breaks the Hut Traverse into two variations, the "Standard Hut Traverse", which includes the 8 huts defined by the AMC today (and was the route run by Matt Cull), and the historic "MacPhail Hut Traverse", which includes a 9th destination at Joe Dodge Lodge in Pinkham Notch, and is about 5 miles longer than the Standard route used by most runners and hikers today.

Adam Wilcox wrote a nice trip report on his 13h53m "standard" Hut Traverse of 6/16/2012: http://adamiata.blogspot.com/2012/06/racing-sun-amc-huts-traverse-6162012.html. Wilcox said, "I'll also throw my two cents in and say that yes, "brutal" is the right word for this route. The footing makes it much more difficult than the numbers would suggest. This aint no western trail!"

Support Style:  A big part of this route is the community, including visiting the huts & resupplying there.  Also, traditionally people have had friends accompany them on part or all of the route - another expression of the community aspect.  Normally having a "pacer" for any distance makes you Supported, but that doesn't seem like a good reflection of the traditions of this route.  So for this route only, we respect the traditions, allow pacers, use the huts, and deem it Self-supported. Trips are Unsupported if one takes only water from the Huts.  Supported would mean taking support not provided by the huts, but so far no one has done this.

Jeff Colt made the following comments about support styles on the Hut Traverse, which make a lot of sense to us: "The Hut Traverse is meant to be a route that connects 8 points in the mountains where hikers can find services. We run this route differently say than another 50 mile backcountry route because of this. The huts offer services to everyone: clean potable water, restrooms, shelter, and if you want food, coffee, or lemonade. Water is the primary service the huts offer. I hope we don't reach a point when folks are doing the Hut Traverse and filtering their own water. But I do advocate for having a single FKT for the Hut Traverse if you take water from the huts."

Winter Trips:  This is a rare route where we have established a Winter Variation, also due to local tradition, and because New Hampshire winters are seriously different than summer.  Only 3 of the huts are open: Carter Notch Hut, Zealand Hut and Lonesome Lake Hut.

Winter is the astronomical definition:  Winter Solstice (about December 21) to Spring Equinox (about March 20).

We have two Winter Variations (thank you to Will Peterson for this clarification):
"Winter Open" - Goes past the three open huts, for 42 miles with elevation gain of 13,500 feet (approximate).
"Winter Standard" - Same as the summer route, which is approximately 48 miles with 16,000 feet of elevation gain.

Two years ago I was planing to write a definitive story for the Resusitator on the Hut Traverse from 1936 to 2007. There is a story in the 1936 December Appalachia titled "On Breaking One's Own Record" by an H.L. Malcolm who crystalized the Traverse in my mind when I read his article in 1953 at my summer home on Lake Winnespesaukee. He begins that article by exclaiming that his interest in 24 hour mountain marathons "was aroused in 1931 by the Marshall brothers, and other hikers in the Adirondack Mountains." Malcolm next heard that two AMC croo, Batchelder and Loomis, completed the AMC hut traverse in 1933 in 23 hours, 15 minutes.

In the late 1950's and early 1960's there were several new records set on the Traverse by some well known hikers including Tom Deans and Chris Goetz. Chris, I believe, did the traverse west to east in just over 16 hours. Tom Deans did not complete his traverse because of jock rash. I have some other names as well.

I completed a traverse on August 16th, 1963, after training for two weeks. I started at Madison at 5:30 am (first light) on that day and ran down Madison Gulf to 19 Mile Brook, up to Carter, over the Wildcats and down the Wildcat Ski Trail to Route 16. I ran to Pinkham on the road and then up to Lakes via the Tuck Trail. I made it from Pinkham to Lakes in 47 minutes but stopped to vomit twice after eating too fast at Pinkham. From Lakes the run was pretty easy. I went via the Mizpah shelter so that my Traverse would include Mizpah after it was built. I got to Lonesome, the old hut, in 12 hours, 11 minutes. I hardly mentioned it to anyone as I was using the traverse pretty much as a training exercise. I have all my hut to hut times documented in a notebook that I kept.

I've heard of others completing the traverse in good times but I think Malcolm and the others before and after him included Pinkham in the Traverse. -- Alex MacPhail 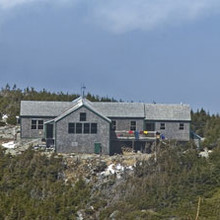 This route on the old FKT site
http://fastestknowntime.proboards.com/thread/93/white-mountains-hut-traverse-nh

Have cath or Tim ever said if this is a determined route or if the winter traverse is acceptable via any route as long as all huts are touched?

The White Mountain Hut Traverse is definitely an iconic route. It's legend, particularly within the Appalachian Mountain Club community, goes back decades. Debbie Livingston and I first did it in 2011, but with a twist. We did it self-supported, and made it a multi-sport adventure by spotting our vehicle at Franconia Notch State Park, and then riding our bicycles to the trailhead. It wasn't a true multi-sport FKT because we didn't make the bike/run continuous and got a some shuttle assistance on Rt. 16. We had a dinner break in between the stages, got help from a friend with a car, then made the hike to the start of the Hut Traverse, then did the traverse.

The combination of the 42+mile ride, 3.8 mile hike, 49 or so mile traverse, and the 1.6 mile hike back to the car totaled about 97 miles. Our total moving time was less than 25 hours including the 19h 48m Hut Traverse. Total elapsed time was more like 36 hours, but I don't have accurate start time for our bike ride. It's irrelevant because we didn't do the bike and run continuously. We had a little break in between the end of the ride and the start of the traverse, included the hike to the start at Carter Notch Hut, and rested at the hut before starting the true traverse. I'm sure this could be pondered as a real FKT, but it would require even more planning and logistics on top of the already considerable logistics that we executed.

We returned in 2013 hoping to better our time without the bikes, but the weather wasn't kind to us that day.

I'm not sure we have the "legs" to try the 2011 version ever again, but never say never. Now that GPS technology and battery life are better, I think a true multi-sport Hut Traverse FKT would be fascinating.

I am going for the McPhail Variation of the traverse tomorrow. I am intrigued by the route, the history and the fact that a time hasn't been recorded since 63. I haven't heard back as to whether I need live tracking so am not going to have it and maybe I can get the huts to write down what time I come through to go with my GPS track from my watch. The old decommissioned osgood trail could be pretty hard to follow which isn't the best so early on in the traverse so I am going to instead bushwack to great glen trails at the rock near the wilderness boundary, which should be about the same distance. Maybe I will explore it in the future and do the traverse again sometime using it. I hope to start from Madison at around 9AM.

Tomorrow I plan to run the hut traverse starting at 6am from Carter Notch hut. I’m not sure if I’ve got a shot at Jeff’s impressive time but I look forward to pushing myself and enjoying a great day in the mountains. It will be self-supported (as previous records) and I do not plan to have any pacers.

Tomorrow, 01/01/2021, I plan on attempting a Winter Hut to Hut. I plan on starting up Nineteen Mile Brook trail at 4am. My goal finish time is under 20 hours which would set a new FKT. I am going solo and unsupported.

I’ll be recording my route on my Coros Apex

I'm going to be taking a shot at the Winter Hut Traverse tonight into tomorrow 1/3/2021. I am unsure if I have it in me to compete with the insane time that Ryan just tossed down yesterday, but I'm going to give it my best effort. Will be recording on my Garmin Forerunner 945, and I'll also have a live tracking link to a SPOT device on my Instagram @_will.peterson