Every area has its test pieces, and Boulder, Colorado, has many. One of the most tested is Mt. Sanitas, part of the City of Boulder Open Space and Mountain Parks (OSMP). In the history of the program, OSMP has only allowed one race on its property, and that was an ascent of the Mount Sanitas Trail, which gains 1300 feet over 1.4 miles. The "Cardiac Arete" race was held October 25, 2003, and was won by Nathan Schultz in 15m27s. Despite the fact that the race raised several hundred dollars for OSMP, and that participants were required to do a few hours of trail work, and that the public feedback was nearly universally positive, the City soon after banned all competitive events on OSMP land. Nevertheless, informal competitions continue as they have for decades, out of sight of city officials.

Numerous records exist on Mt. Sanitas. Besides the ascent of the south ridge, via the Mount Sanitas Trail, many records exist for one or more "laps" of the 3.3 mile loop route that includes the Mount Sanitas Trail, East Ridge Trail and the Sanitas Valley Trail. The former 2 trails are extremely steep, rocky and rough, while the Valley Trail is a smooth, double-wide gravel path. These trails are among the most popular and crowded in the OSMP system, often making speed record attempts even more challenging.

For those attempting their own trials on Mount Sanitas, it is traditional that you must touch the post at the north end of the bridge by the picnic shelter off Sunshine Canyon Drive, and the metal post at the summit. For a multi-lap tour you must do this every lap.

The Mt Sanitas Trail has a Strava segment, but since Strava is often off by many seconds, and since many of these FKTs were set prior to the widespread use of GPS watches, it is important to record your exact time in addition to posting what Strava says (i.e., look at your watch at the bottom and top).

Here's a list of some of the FKT's that have been reported for Mt. Sanitas. Many more times are listed on Bill Wright's website. 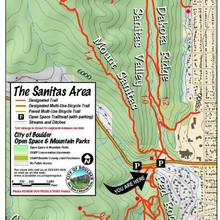 Hi there.  I'm attempting an FKT on Mt. Sanitas tomorrow morning at 8am.  I'm planning on warming up a few miles and then making the attempt.  My attempt will probably start around 8:30 MT.  It will be uploaded to my Strava, Garmin connect, and I will handtime the time from the post to the summit post.  Thanks, Tripp Hurt

Honestly-had no idea what I’d run, so we gave it a go. Ran 3 miles on 4th Street in Boulder for warmup. Did a few strides on Mapleton Street before starting. 44 degrees, sunny, and no wind. Let Brad Miles take us out for the first 300-400 meters. Blasted the first half and paid dearly for it on the 2nd half. I had 15:52 for ascent via the Mt Sanitas Ridge Trail from wooden post to metal pole. Maybe I’ll try again after the summer of racing? Not in the best of shape right now. We slogged down Lions Liar afterwards. Here’s the Strava for the ascent :

Howdy, After 4 years I am going to go for the 24hr & 30lap FKTs again on Mt Sanitas Friday (5/8/2020). I will be doing the standard lap up the ridge to the top and down the valley to the bridge by the picnic shelter. I plan to start around 9am MT. I will upload to Strava and Garmin Connect right after. I am doing this Supported with Family dropping off food for me and words of encouragement. I currently don't have any pacers and will be wearing a mask because of Covid.

I gave it a solid effort but still came up short. I called it after 20 laps in 19:45. https://www.strava.com/activities/3424007777. Thanks to Tripp, Brad, Rob, and Erik for pacing me through a few Laps and my whole family for coming out. A special thanks to Rob and Erik for helping with the night shift. It was a great experience that really pushed my body.