The East Bay Skyline National Trail traverses the ridge line above the coastal mountains situated to the east of Richmond, Berkeley and Oakland; and ends in Castro Valley. It goes entirely through the East Bay Regional Park system; Wildcat Canyon, Tilden, Sibley, Huckleberry, Redwood and the two Chabot parks. This is the eastern portion of the yet-to-be-completed Bay Area Ridge Trail.

I believe it's marked so that hikers can use either the French Trail route or the West Ridge route through Redwood Regional Park. I however think that the up-and-down of the French Trail (the "crown jewel" of East Bay trails, imho) along with its beautiful single-track (as well as being closed to bikes) adds some challenge to the 32+ miles.

The northern terminus is Wildcat Canyon Staging Area in Wildcat Canyon Regional Park, on Park Ave in Richmond, where there’s a short paved road that ends at the Wildcat Creek Trailhead. There are three potable water sources available; the first at Tilden Steam Trains, the second at Sibley Staging Area and the last at Skyline Gate.

I've only been able to find available info from a few thru-hikers through their websites; here's one: gurmeet.net/hiking/hikes/East_Bay_Skyline_National_Recreation_Trail.html

I feel this trail is an under-rated, yet iconic gem of the East Bay (and Northern coastal California for that matter); both the Dick Collins Firetrails 50-miler and the Skyline 50k are two classic East Bay races that both use large (southern) portions of the trail.

Note:  Generally accepted practice would be to use public spigots for water under "Unsupported".  If you purchase snacks or drinks that's "Self supported". 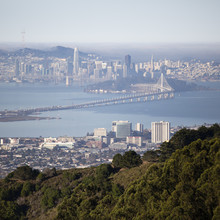 This route on the old FKT site
http://fastestknowntime.proboards.com/thread/488/east-skyline-national-trail-hi…

Hi! My name is Tara Madsen-Steigmeyer, and I'm planning to follow in Marcy's footsteps and try to improve on her EBST time from last year. I know I won't be able to do justice to her photo documentation, but I hope to shave at least a bit of time off. This is my first ever FKT attempt, so I'll see how it goes. I've run the middle section of this route a handful of times (and some sections LOTS), but this will be the first time I've run through Chabot. I'm looking forward to doing the whole thing! Thanks to Jimmy for getting it started, and to Marcy for setting a women's benchmark.

My plan is to make an attempt on Thursday, Jan 31st. I think my husband will drop me off at the start before kindergarten drop-off, so I expect to start around 7:30a. I'll post my Strava track and pictures when I'm done!

I've been thinking since last spring about doing an out-and-back on this route, so I'm planning to try it tomorrow (Feb 18).  Starting/finishing at the south end.  Self-supported, carrying everything from the start except water (refills at fountains).  Should be interesting!

InReach will be running: https://share.garmin.com/MarcyBeard

It looks like most (maybe all) of the self-supported times here should actually be considered unsupported.

Ay-oh! What a lovely route I must say.

I have been doing most sections in separate occasions and I plan on doing the full route tomorrow morning at sunrise to avoid the weekend and day crowds in this special period of social distancing.

Due to water fountains being unavailable at this time, my partner will likely meet me at Skyline Gate for a quick 1L refill for the last 13 miles. I understand this will count as "Supported" effort.

Hi again! What a fun morning it was with a 5:01:01. I got dropped off and picked up by my partner Kristine. And I ended up doing the route unsupported carrying all needed stuff.

Here is the trace with the full report: https://www.strava.com/activities/3239780079/overview

And I share the report here for those who don't use Strava:

I had in mind running this line (https://fastestknowntime.com/route/east-bay-skyline-national-recreation…) for a while and it was supposed to be this past weekend pre-covid-19 era. However, with the social distancing rules, it seemed too risky for a Saturday with so many crowds around. As a result, I took the weekday off (thanks Brian for the suggestion) and went for it.

I got dropped off by Kristine at Wildcat Canyon Regional Park at 7am. The run started a few minutes later along the creek. I enjoyed chill temperatures and light fog until Skyline Gate Staging Area. Notable but without big consequences, I sprained my ankle just before Sibley Volcanic Regional Preserve and it led me to walk a few minutes to monitor the pain. I tried to push on the French Trail but legs were already lagging behind. At this point, I switched the lofty goal of getting not too far from 4:18 (Paddy's time is a bit insane) to finishing under 5 hours. I got in a tiny pain cave between km35 and km43. A final Gu gel took me out of it. From there, it was Brandon Trail all the way to the finish, at Proctor Staging Area. I checked the timer that was nearing 5:00 and gave my best. In vain though, the watch stopped on a funky 5:01:01. Kristine welcomed me and after a few minutes of recovery, we were off.

Note after route review, that I made a few different turns:
1. At the very start, just before hitting the Alvarado parking, I went down towards the creek and back up while the original stays on the larger trail 🤷🏿‍♂️. Likely costed a few seconds rather than saving some.
2. In Sibley, I used the Water Tank road instead of Skyline Trail for a few hundred feet.
3. In Huckleberry, I used the Bay Area Skyline trail all the way instead of switching to Huckleberry Path. Likely equivalent.

Most sections of the route are large enough to respect the 6-feet distance. The French Trail and Huckleberry Botanic Regional Preserve required a bit more actions to cross path properly but this was only needed 4-5 times.

Alright, until next time ✌

Has anyone run this route from South to North? And does anyone know whether any of the water fountains are currently operational? I'm planning to give it a go later this week but can carry at most 3.5 liters (and tend to drink a lot, especially when it's hot). My hope is that the South-to-North route will give me the psychological boost of feeling like I'm running "home," since I've been living near Tilden and running the northern segments pretty regularly.

Hi @eriehl, water was wrapped in plastic at Sibley Staging Area and at Skyline Gate last weekend (5/16/20). However, a trail runner reported the plastic was removed the day after.