The Pemigewasset Loop is a rugged 30-mile route in the White Mountains of New Hampshire. It has become a popular backpacking route, as well as a tough 1-day challenge. This page has detailed information about the route.  Here we record FKTs for the loop in either direction, plus for the Double Pemi, as well as for the so-called "Super Pemi", or "Super Extended Pemi", which adds on North Twin, Hale, and Zealand (or the reverse) to create a larger loop of around 43 miles with about 15,000' of climbing. More information on the Super Pemi is linked in the FKT report by Nate Weeks. 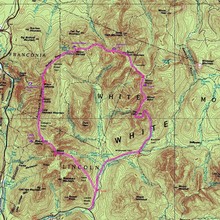 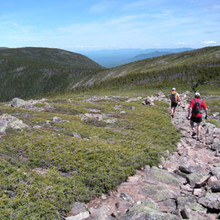 Updated the video with 2020 times https://youtu.be/Dwqtyd4N5WA

I will be Running clockwise on the Pemi loop. Will be starting tomorrow morning around 8 o’clock and plan to run and unsupported. I will be carrying a few thousand calories and two filtered soft flask bottles. Date will be June 16 2021. This is my first attempt at an FKT. I won’t be taking any outside aid and plan to filter my water at the designated areas. This should be a lot of fun. I can’t wait to get out there and give it my best.✌️

I ran the single Pemi loop in the clockwise direction on August 23rd, 2021 in a time of 5hrs37min44sec. 1min13sec off Kuenzle's current unsupported FKT. Close but no cigar, figured it was notable

Ryan Williams asked a few of us to comment on the inclusion of the Garfield summit on this route.

My policy has always been to follow the route of the person who set the FKT.  Debates to include various summits on routes could get endless.  With this situation, it is pretty minor, and if someone can set the FKT with Garfield, than it should be included from then on.  However, deciding on route changes by committee is not the way to go in general, similar with deferring to what is written in a guidebook.  That type of thing has and will lead to confusion.  If someone posts an FKT, that is the route.  Unless I am mistaken, changes based on a runner's opinion of the route are not permitted.

Has anyone claimed the winter loop yet?

I finished it yesterday at turtle pace:

Anything below tree line had deep snow soft in most places best with snowshoes. Above tree line was bare rock covered occasionally with ice.

Temperature was reasonable all day hovering just below freezing. Wind was mild above tree line.

Had plenty of food. Found one water source half way at Garfield camp site.